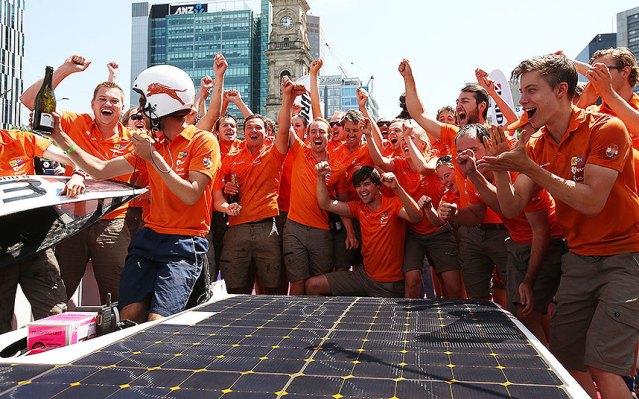 The Nuon Solar Team has won the Bridgestone World Solar Challenge for the sixth time in its Nuna8 solar car. Never before has this race – which takes teams right through the very heart of Australia – been such a close call. The solar car driven by Solar Team Twente was less than three minutes behind the Nuna8. There was a lot of cloud too. This stopped the sun from charging the battery via the solar panel. This was a huge problem, because just a limited amount of power was left in the battery on the last day of the race. At the start of the day, it wasn’t even certain that the team would make the finish at all.

The last kilometres of the World Solar Challenge were truly nail-biting for the Nuon Solar Team. Even more cloud, a puncture or a red traffic light: any of these would have enabled other teams to overtake the Nuna8. Fortunately, Nuna8 was the first car to pass the finish line, at 03.00 hours Dutch time. The team and the Nuna8 were welcomed across the red carpet in the Australian city of Adelaide to loud cheers from the public. A big party was inevitable. Victoria Square in Adelaide became a sea of orange, with team members loudly celebrating their victory.

“It really was very tense,” says Bianca Koppen from the Nuon Solar Team. “At the end of the race, there were just three minutes between us and the team from Twente and the weather wasn’t great on the last day either. There was a lot of cloud, which made it difficult for us to charge our battery. I had a stomach ache because I was feeling so nervous. We had spent more than a year working on the Nuna8. When you’ve done that, there’s just one thing you want and that’s to win. Words can’t express how happy I am that we did.”

A lot of traffic

Driver Tim van Leeuwen drove the last leg of the race, towards Adelaide: “This was a very difficult part of the course, because there was such a lot of traffic on the road. We had to be really careful to make sure that we came through the last 180 kilometres in one piece. It would have been terrible if things had gone wrong at such a late stage in the race.”

The team finished the race with the traditional dip in the fountain. This quickly washed away all of the dust accumulated during their 3,000 kilometre race through the outback of Australia. However, it certainly didn’t wash away their memories of what had been a very exciting race.

The Punch Powertrain Solar Team has earned fifth place in the Bridgestone World Solar Challenge, the unofficial world championship for solar cars. 45 teams from 25 countries participated in the race. The students were hoping for a podium place, but their luck turned during the race.

The Punch Powertrain Solar Team consists of sixteen KU Leuven students. As part of their postgraduate programme in innovative entrepreneurship for engineers, they were given the opportunity to put their knowledge into practice. For a year and a half, they worked on their solar car.

On Sunday, 18 October 2015, they appeared at the start of the world championship for solar cars in Australia – with ambition. Their Punch One completed the 3,000-kilometre race across the Australian outback from Darwin to Adelaide. On Thursday, around a quarter past eleven local time, the Solar Team arrived in the centre of Adelaide.

After a successful qualification and a smooth start the team held second place for a while. But a flat tire and a problem with the rear wheel made the students lose valuable time. In addition, the team was given a one-hour penalty. The organisation claimed that one of the Belgian support cars had carelessly overtaken another solar car. The students do not agree.

“It’s unfortunate that we received that penalty, but we kept giving it our best despite the situation”, says team manager Jarno Van Hemelen. “I think that we just have to focus on the car’s excellent performance and on the tremendous progress we’ve made. We arrived at the finish line a day earlier than last time.”

Race pilot Bert Longin joined the team for the first time:“I think they’ve done a great job. It’s impressive to see the students pulling all-nighters to get the car ready for us. They’ve had to cope with several setbacks. To stick together as a team like that in those circumstances: impressive. We came in fifth, but it feels like a victory.”

On average, the solar car reached 90 km/h. That makes this year’s solar car team the fastest Belgian team to ever have participated in the competition.

For the second year in a row, the solar car race was won by Delft University of Technology (Netherlands). They arrived three minutes before their compatriots from University of Twente. The bronze medal went to the Tokai University team (Japan), which overtook the University of Michigan solar car in the final kilometres.