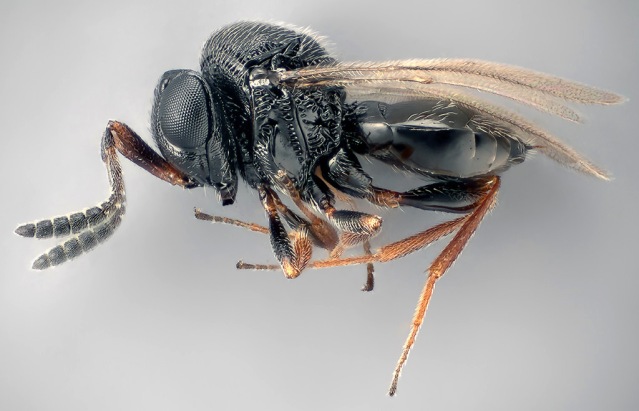 The discovery in Washington state of a parasitic wasp that kills its host like a
scene from the “Alien” sci-fi movie has entomologists
cheering from the west coast to the east.

That’s because the wasp’s victim – the brown marmorated stink bug – is far more wicked. What’s more, the wasp, which hails from Asia and is being studied under quarantine in the U.S., has been found living at a public park in Washington.

Two small clusters of Trissolcus japonicus were discovered in Vancouver, Wash., by a field technician with Washington State University’s Tree Fruit Research and Extension Center, according to entomologist Elizabeth Beers who supervises the worker.

“We did not expect to find this wasp here and are very excited about the discovery. In the insect world, we struck it rich,” she said.

Here’s why: Since 2007, the U.S. Department of Agriculture (USDA) has been directing studies of T. japonicus in quarantine laboratories to determine if it can be released in the wild to destroy the crop-wrecking brown marmorated stink bug. This stink bug species, which also originated in Asia, has caused millions of dollars in damage to fruit orchards in the Mid-Atlantic since it was discovered in Pennsylvania less than two decades ago.

When the weather turns cold, the bugs invade warm buildings. When crushed, they emit a stench like dirty socks.

‘Right under our noses’

As the shield-shaped stink bug moves east to west – strengthening its grip on Washington, Oregon and parts of California – the equivalent of a SWAT team of insect experts has been searching for ways to stop it.

“Because the brown marmorated stink bug is not native to this country, it’s less likely that natural enemies exist here to destroy it,” said Beers, WSU’s representative on this scientist SWAT team, which is comprised of some 52 scientists from 10 institutions. “As it turns out, there’s one right under our noses.”

And that would be the tiny T. japonicus, found by WSU tech assistant Josh Milnes on the leaves of a maple tree in Vancouver, first on Aug. 14 and again on Sept. 23. The 20-plus wasps in each cluster had just finished destroying the brown marmorated stink bug eggs that Milnes had left at a sentinel study site, said Beers.

Here’s where things get “Alien”-like. The female wasps, no bigger than a typed comma, lay eggs inside clusters of stink bug eggs. After a wasp egg hatches, the larva eats the stink bug egg host, “killing it in the process and then bursting out as an adult wasp,” Beers said.

The wasp specimens were sent to USDA research entomologist Elijah Talamas in Washington, D.C., who positively identified them as the Asian wasp species, explained Beers.

“When I heard the news, I thought, Oh my gosh, this is a biocontrol game-changer,” said USDA entomologist Tracy Leskey in West Virginia,  leader of the national stink bug research team.

Though several T. japonicus wasp clusters have been found in Maryland and Virginia during the past two years, “the fact that the wasp showed up 3,000 miles away in Washington tells us that the stink bug’s natural enemy is deployed for attack,” she said. The discovery also suggests the wasp was accidently brought to this country multiple times, much like the very stink bug it destroys, she explained.

The female wasps, no bigger than a typed comma, lay eggs inside clusters of stink bug eggs.

Most likely, T. japonicus traveled here undetected in stink bug egg masses on plant cargo shipped from Asia, said USDA research entomologist Kim Hoelmer who studies the wasp species in a quarantine lab in Delaware. It’s also possible that an adult wasp or two hitched a ride on a jet and simply deboarded with the humans.

So what happens when scientists hunting for a bug killer discover the killer living in a public park?

As scientists monitor T. japonicus to see how much it spreads in the field, research will continue in lab settings, said Hoelmer.

“We don’t want to introduce a non-native wasp that kills native stink bug species beneficial to our crops,” he explained. So far, however, the research looks promising that this tiny prizefighter favors the brown marmorated variety, he said.

Damage: BMSB (brown marmorated stink bug) has piercing and sucking mouthparts with which it sucks plant juices from fruits, pods, or other parts and causes malformation, discoloration or cloudy spots, depressed areas, and wart-like growth depending on the plant or damaged part. Small dark spots also develop as a result of puncturing by its mouthparts and these areas can harbor secondary infections. BMSB is also known to transmit witches’ broom, a phytoplasma disease in princess tree (Paulownia tomentosa) in Japan, but such disease transmission has not been reported in the US. 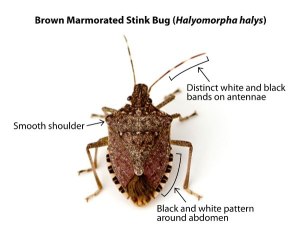