A submarine designed and built by engineering students at the University of Warwick was awarded 1st Prize for Innovation at the 2015 the International Submarine Races (ISR).

Held at the Carderock Naval Facility at Bethesda, Maryland USA, the ISR competition saw a team of eight students from the University’s School of Engineering compete against 30 international teams to race a one-person, pedal powered submarine. 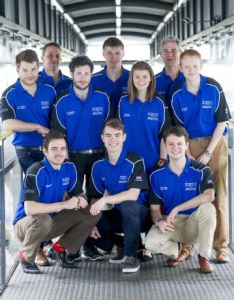 2015 marks second year that Warwick students have entered competition. The 2014 team achieved second place in the UK and fourth in the world.

One of the biggest engineering challenges that faced the team was how to economically transport the submarine across the Atlantic. Fully assembled, the submarine is too big to fit inside standard packing crates making air freight travel very expensive.

Project Leader Richard Freeman explained; “We managed to reduce flight costs by designing a ‘fold away’ submarine; the chassis can be dismantled into four separate sections and can be packed up into a far smaller crate”. The work results in a transportable, world-beating innovative design.

The competition itself is recognised globally as an opportunity for some of the best students, from a host of universities, to demonstrate their knowledge and passion for engineering,

Students are required to work as a team applying the skills learnt on their course to a practical application. The culmination of the project in the UK is a week-long event where teams are assessed on a variety of criteria, following the completion of straight-line and slalom courses. The overall winner is determined on the basis of design, manufacture, performance and lessons learned. Awards also include those for speed, agility, innovation and presentation.

The team’s existing sponsors include;