by University of Pennsylvania 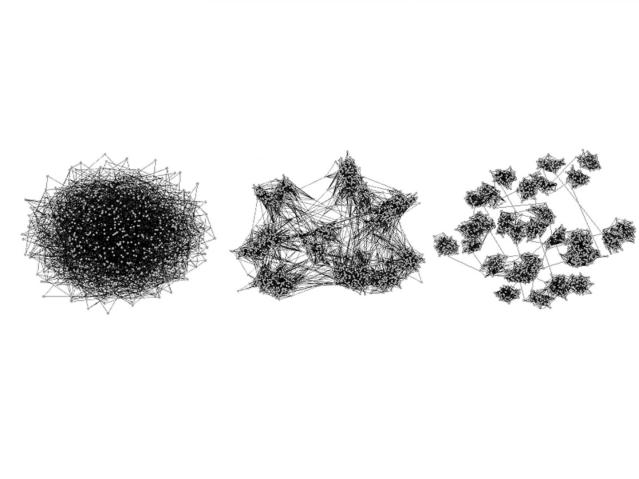 Social networks influence how ideas and beliefs can spread around a society. In this study, the University of Pennsylvania’s Damon Centola shows that networks that are very diffuse (left) make it hard for ideas to catch on, while networks with very strong group boundaries (right) make it almost impossible for ideas to spread. A network that was moderately “grouped,” however, was most conducive to spreading complex ideas.
Credit: University of Pennsylvania

Social networks affect every aspect of our lives, from the jobs we get and the technologies we adopt to the partners we choose and the healthiness of our lifestyles. But where do they come from?

In a new study, the University of Pennsylvania’s Damon Centola shows how social networks form and what that means for the ideas that will spread across them.

The findings suggest that a policy to increase integration in the workplace by doing away with ethnically affiliated clubs, for example, could actually reduce the likelihood that ideas and beliefs would be shared across the company. The work has implications for institutional attempts to increase diversity, businesses’ efforts to spread shared values and organizations interested in integrating solutions to complex problems.

Centola is an associate professor in Penn’s Annenberg School for Communication and School of Engineering and Applied Science and is director of the Network Dynamics Group at Penn. His work is published in the American Journal of Sociology.

The work builds off foundational research by social theorists Peter Blau and Joseph Schwartz. In 1984, they argued that societies in which group affiliations were eliminated would enjoy the greatest levels of social integration. A direct implication of their theory was that social policies that reduce group boundaries would create the most opportunities for complex ideas and shared knowledge to spread across a society.

In the current work, Centola revisited Blau and Schwartz’s theories using a new computational model to understand how social affiliations create networks and, in turn, how complex ideas and shared practices can diffuse through those networks.

The model assumed that each individual’s personal and professional characteristics (e.g., gender, race, religion, income, education, political party, preferred recreational activities, residential neighborhood, etc.) define that person’s identity. The structure of a society is determined by the extent to which different characteristics are correlated with one another. For instance, if a person knows another’s religion, income and education, can he or she also predict the neighborhood where that person lives?

Centola’s experiments with the model showed that these correlations have striking implications for the social networks that emerge.

“The results are surprisingly clear,” Centola said. “The stronger these correlations are, the more ‘grouped’ the entire social network is. Small changes in the correlations between two characteristics, for instance religion and residential neighborhood, have large consequences for the ‘groupiness’ of the social network.”

The analysis also revealed a twist on Blau and Schwartz’s work. As Blau and Schwartz predicted, reducing group boundaries increased the likelihood that complex ideas could diffuse across a population, but only up to a point.

“When a society is too grouped, people do not have any social contact with people from other groups,” Centola said. “People with the same job all attended the same school, live in the same neighborhood and frequent the same clubs. Their networks do not expand beyond that group.”

Loosening these tight group boundaries means that people’s next-door neighbors may have different jobs or levels of education, but they may still have similar politics or recreational activities. These similarities allow people in different social groups to encourage the adoption of a new complex idea, take neighborhood recycling as an example, which can then spread to other neighborhoods and social groups.

But when group boundaries are eliminated entirely, people have almost nothing in common with their neighbors and therefore very little influence over one another, making it impossible to spread complex ideas.

“There’s a belief that the more that people interact with strangers, the more that new ideas and beliefs will spread,” Centola said. “What this study shows is that preserving group boundaries is actually necessary for complex ideas to become accepted across diverse populations.”

This is especially true for adopting new solutions to hard problems. In business settings, for example, a new piece of information about a stock price might not require strong social reinforcement in order to spread. But a more nuanced idea, such as what is considered an acceptable way to conduct business or how to respond to a new “green” initiative, can require strong social support to diffuse throughout a company. The success of a new initiative can depend upon group structures that can grow widespread support across a large organization.

Centola further noted that these kinds of structures, in which group boundaries exist but overlap to some degree, are naturally occurring on the Internet. Distinct online communities sprout up among people with common interests, yet these groups also have interconnections across their membership.

“It could be that the Internet is in fact set up and operates in such a way as to allow easier coordination on complex ideas,” he said.

Courtesy of University of Pennsylvania