Have We Lost Turkey ? (Column) 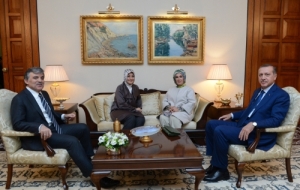 A few nights ago I was sitting on a roof terrace in Zamalek, Cairo, talking to one of the young leaders of the Tahrir Square revolution.

With a beer in our left hand and a water pipe in the right, we talked about the revolution and how the so-called April 6 Movement organised the protests day after day. These young people started their protest movement already in 2008, with a huge strike all over Egypt, on 6 April, the 80th birthday of former leader Hosni Mubarak.

During our discussion he told an even more astonishing story. Along with 59 other young leaders from the April 6 Movement, he was invited some weeks ago to visit Turkey. Not for tourism though. They met with PM Erdogan, with President Gul, with foreign minister Davutoglu and many more.

These very busy top politicians took their time and spoke freely of what their plans were for the future. Their message was that they want to create a new alliance between Turkey, Egypt and Iran. Turkey would invest a lot in Egypt, hoping for friendship and a big new market for its booming economy. What they are planning to do with Iran is less clear. But it is obvious that these three countries are in military and economic terms by far the strongest in the region.

“By the way,” he told me, “You in the West look differently at Iran than we do. For us it is a strong country.”

The fact that Turkish leaders personally told him all makes the story all the stronger.

Of course, it is true that Turkey is becoming a leader in the region. To make it clear Erdogan recently visited Egypt, Libya and Tunisia – the three countries that got rid of their dictators. He made a very strong impression at a meeting of the Arab League when he said it was not an option but an obligation to support the Palestinians in their statehood bid at the UN. He was greeted at the airport by crowds chanting “Welcome, Erdogan, Saladin!”

The alliance could be a very long term plan. Could be. But a few days later Turkish foreign minister Davutoglu said in an interview that he seeks an alliance with Egypt and that within two years Turkey is going to invest not less than €4 billion in the country. Meanwhile, Europe is talking about one million.

In any case, my water pipe friend is not the only one happy with the idea – many Egyptians support it.

Whatever happens with the alliance in future, it is clear that Turkey has turned its head from the West to the east. Angry and humiliated as they are because of the refusal to let them enter the EU (which has a religious dimension), they want to build their own union, based on secular Islamic principles.

Somehow I understand this. It is a lot nicer to be greeted as a hero in the east then as a beggar in the West. That is after all how the EU has treated them. An attitude we might soon regret.