The Bree/Schilde Summit Or The Future Leadership Summit 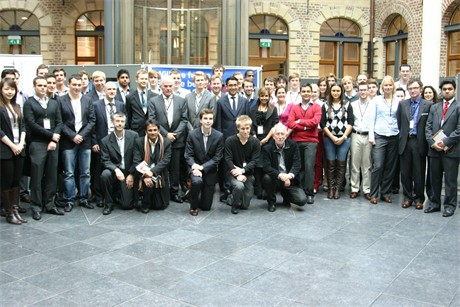 Elected student leaders from all over Europe came to Bree and Schilde for the first ever Future Leadership Summit. 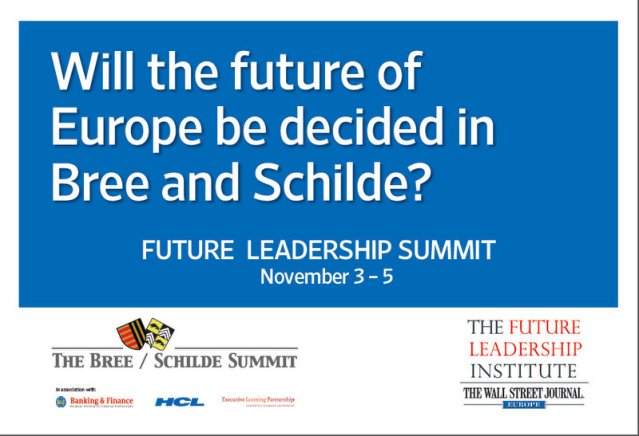 7. Description: The BREE/SCHILDE SUMMIT is a 3 day Summit, starting in the Belgian city Bree, followed by a closing session in the Belgian city Schilde. The Summit targets two groups of participants. On the one hand the Summit welcoms a group of democratically elected student leaders from top tier business schools and universities, from all over Europe. On the other hand the Summit welcoms a group of international CEO’s. During the Summit the student leaders and the CEO’s are presented a series of high level leadership sessions catered to their specific needs. At the last day of the the Summit the elected student leaders are then matched with the CEO’s.

8. Goal of the Summit: The goal of the Summit is to contribute in a tangible way to the development of skills in finance, economics and international business from a global perspective which will aid future leaders to succeed in their international careers. On top of the presented content the elected student leaders are ‘paired’ to a CEO. During a private session and a meal the CEO and his/her student leader(s) can come to know each other, discuss the content of the leadership sessions, and build a relationship that might last a lifetime.

The SUMMIT is not only a learning and networking moment for student leaders, The Future Leadership Institute* also expects to learn from the body of student leaders how our future world will look like once in the hands of this group of future leaders.

12. Sponsor Program: We are reaching out to multinationals to ‘sponsor’ 1 student leader each. We expect sponsors to also send a top executive to be paired to a student leader.

16. Program:
All the sessions are structured to bring together captains of industry and student leaders in forums where they can exchange their views and concerns on local and global issues, and find solutions together. Several of the topics chosen to be discussed are based on research conducted by Executive Learning Partnership (ELP), one of the partners of The Wall Street Journal Europe Future Leadership Institute*.

1. The Municipality of Bree, Belgium

The Mayor of Bree, Mr Jaak Gabriëls, generously offered to host part of the inaugural Future Leadership Summit in his municipality. Here is what he says about Bree: “Bree is a small Belgian city with a great history: in 2007 we celebrated our 1000th anniversary. Our historical and cultural strength is still visible in the well preserved historical buildings from the prosperous 17th century.

Bree is an important local city in the North East of the province of Limburg (one of the 11 provinces of Belgium) and centrally located in Europe, on the borders on The Netherlands and Germany. Our city has a lot to offer for tourists, shoppers and for sight seeing, especially in our natural park covering a green and silent area that even crosses the country border in Weert (Netherlands). Bree is mostly known as an active city in industry, small and medium companies, services and local shopping, café’s and restaurants.

Furthermore Bree is world famous thanks to Kim Clijsters, one of the best tennisplayers in the world in the WTA-circuit. Kim was born and raised in Bree, and still lives here. We are proud to welcome you in our historical and charming city and we hope that you will have a good time and make friends, to come back again!”

2. The Municipality of Schilde, Belgium

The Mayor of Schilde, Mrs Yolande Avontroodt, has kindly offered to host part of the inaugural Future Leadership Summit in her municipality. Schilde is located in the Belgian province of Antwerp. The municipality comprises the towns of Schilde proper and ‘s Gravenwezel and has a total population of about 20,000. It has one of the highest per capita income levels in Flanders. 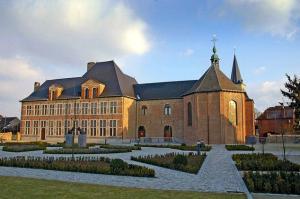 This Town house was a former Augustinian monastery (1659) which has been completely renovated and restored. It became a showcase of modern architecture, while at the same time the historical character of the building was retained. Old frescos were discovered and a beautiful piece of art was found in the mayor’s office and the aldermen’s room.
Address: Vrijthof 10, 3960 Bree, Belgium 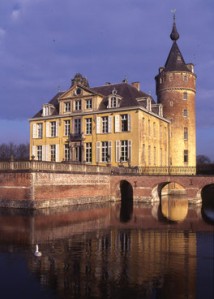 Surrounded by a moat and set within 62 acres of parkland, Kasteel van ’s-Gravenwezel (Castle of ‘s Gravenwezel) has withstood wars and feuds, and survived often misguided architectural alterations and downright neglect. When Axel Vervoordt and his wife, May, bought it in 1984, Vervoordt immediately embarked on a four-year restoration programme to ‘cleanse’ it of its unnecessary additions.
Axel Vervoordt is a Belgian antiques dealer, collector and interior designer who over the past four decades has come to be regarded as one of the most original and influential figures in art and design.
Under the Vervoordts’ tenure the castle has once again taken on a sense of magic and wonder, with a new energy provided by its owners’ ever-evolving collection of art and furniture, as well as their individual approach to interior design. Artworks range from archaeological Egyptian stone vessels and Chinese Sung dynasty Buddhas to Renaissance bronzes and contemporary paintings by the world’s most sought-after artists. The castle has more than 50 rooms, each decorated in its own style to display exquisite pieces of antique furniture and priceless paintings and artefacts. In the all-white dining-room is a display of antique Chinese ceramics recovered from the Geldermalsen, a Dutch East Indiaman that sank off Jakarta around 1751.