Donald Trump’s decision to unilaterally pull the US out of the Iran nuclear deal doesn’t just have important political and security implications. Because sanctions are at the heart of the deal, it will also have a significant economic impact. Just how big this is depends on the response of the European signatories to the deal – the UK, France and Germany.

The Iran deal did not have as big an effect on Iran’s economy as it might have had. It was reached in November 2015, shortly before the start of the US electoral season and almost all the US presidential candidates took a harder line on Iran than Barack Obama. So, although the deal removed major legal barriers to trade with Iran, many businesses were waiting for the outcome of the US elections before approaching the Iranian market.

Some European businesses entered Iran following the nuclear deal, but the most disruptive banking restrictions effectively remained in place, as major European banks refused to work with Iran, especially once Donald Trump was elected. As a result Iran did not receive the full economic benefits it expected from the deal, even before Trump’s decision to withdraw.

Despite this, the deal did have some major effects on Iran’s economy. It resulted in a doubling of Iran’s oil exports, helped stabilise the foreign exchange market, created jobs and – most importantly – optimism to the overall trend of the economy.

The US withdrawal will weaken all the deal’s achievements but will not necessarily do away with them entirely. That depends on the rest of the world’s response.

If Europe ignores the US …

Europe now has a major role in determining the fate of the Iran deal. It will be very difficult to maintain the deal without the US as many of the unilateral US sanctions, are secondary sanctions that penalise non-American firms for trading with Iran. From a purely economic point of view, Europe might not find it worthwhile to confront the US over Iran, as it will be costly to oppose the US secondary sanctions.

But Europe has a lot to lose if the deal collapses from a security and political point of view. Trump’s move has been a humiliating rejection of the advice of his European counterparts to keep it. Its collapse and the potential for tensions to escalate poses a major security threat to the Middle East, which European leaders want to avoid. So, despite the economic costs, Europe might still decide to oppose the US, as Trump is effectively gambling Europe’s security to please his voters.

If Europe, along with China and Russia, decides to ignore the US, a non-dollar method of payment will be needed to secure Iranian oil transactions and protect European firms doing business with Iran from the US sanctions. In that case Iran will get access to its oil money. Plus, major industries like petrochemicals and cars, whose main trading partners are in Asia and to a lesser extent Europe, will continue to benefit.

As for the private sector, many businesses might still decide not to enter Iran, as it remains a high-risk environment. But at least those who have already entered the country will not be forced to leave. It will also create some confidence in the economy, which will help the Iranian private sector and small and medium firms.

If Europe fails to find a way to avoid the US secondary sanctions, things will return to the situation between 2010-15. The significant loss of oil revenues will result in further devaluation of Iran’s currency, the rial, which has already lost its value against dollar by almost three times due to the recent uncertainties around the deal. 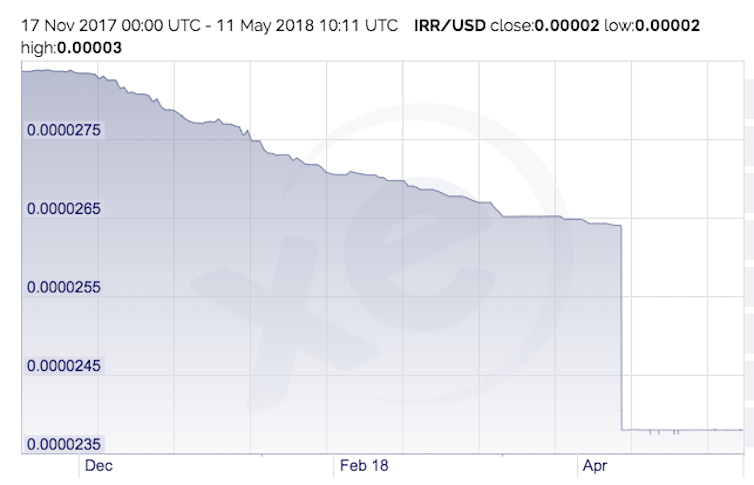 The Iranian rial to US dollar over the last three months. XE

At the wider economic level this bring with it higher inflation and lower growth. For Iranian companies it will increase their operating costs, particularly those that rely on foreign markets for either their inputs or exports.

The sense of urgency in the sanctions environment will justify higher government intervention in the economy, which could lead to price and capital controls. The Iranian government has already put a tight capital control in place in anticipation of reduced oil revenues.

Government controls along with blockage of formal routes of financial transactions will create an incentive for smuggling and black markets. The main beneficiaries of these are the people and institutions involved in money laundering and other forms of illegal activities – not only inside Iran but also in its neighbouring countries.

In the long run, the Iranian economy under sanctions will become more reliant on the government and public sector. Sanctions weaken the private sector and small and medium firms who cannot bear the high costs of operating under them. This means a shrinking of the middle class, which will only increase support for populist politicians that are more confrontational towards the West.