NASA Powers on New Instrument Staring at the Sun

NASA has powered on its latest space payload to continue long-term measurements of the Sun’s incoming energy. Total and Spectral solar Irradiance Sensor (TSIS-1), installed on the International Space Station, became fully operational with all instruments collecting science data as of this March.

Shown here: TSIS-1 getting extracted from the trunk of the SpaceX Dragon capsule.
Credits: NASA Goddard

The instrument was launched from Space Launch Complex 40 at Cape Canaveral Air Force Station in Florida aboard a SpaceX Falcon 9 rocket on Dec. 15, 2017. After a two-week pause, TSIS-1 was extracted from the trunk of the SpaceX Dragon capsule and integrated onto its permanent home on the space station.

For over two months, the operations team at the University of Colorado Laboratory for Atmospheric and Space Physics (LASP) in Boulder, Colorado have been testing TSIS-1. First, the team tested the all-important pointing platform that directs the solar instruments at the Sun. 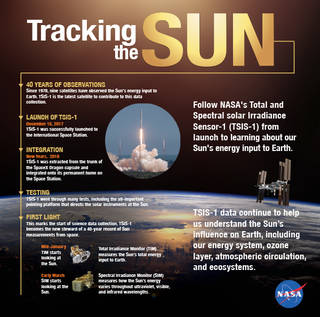 Follow NASA’s TSIS-1 from its launch to its installation aboard the International Space Station to its collection of science data.
Credits: NASA Goddard

Next came testing of the solar instruments. TSIS-1 studies the total amount of light energy emitted by the Sun using the Total Irradiance Monitor, one of two sensors onboard. This sensor’s data will give us a better understanding of Earth’s primary energy supply and provide information to help improve models simulating the planet’s climate. The monitor first started collecting science data – called “first light”— on January 11th after its doors were opened to fully view the Sun. The sensor extends a 40-year measurement of the Sun’s total energy to Earth.

The second onboard sensor, called the Spectral Irradiance Monitor, measures how the Sun’s energy is distributed over the ultraviolet, visible and infrared regions of light. Measuring the distribution of the Sun’s energy is important because each wavelength of light interacts with Earth’s atmosphere differently.

“All systems are operating within their expected ranges,” said Peter Pilewskie, TSIS-1 lead scientist LASP. “A lot of hard work remains for the team to interpret and validate the TSIS-1 data.”

Shown here: the pointing platform directs the solar instruments at the Sun. Perched on the space station, the instrument operates like a sunflower and follows the Sun from sunrise to its sunset, which occurs every 90 minutes. At sunset, TSIS-1 rewinds, recalibrates and waits for the next sunrise.
Credits: University of Colorado Laboratory for Atmospheric and Space Physics (LASP)

NASA’s Goddard Space Flight Center has overall responsibility for the development and operation of TSIS-1 on the International Space Station for the next 5 years.  LASP under contract with NASA, is responsible for providing the solar irradiance measurements and providing them to the Goddard Earth Science Data and Information Services Center, the archive and distribution center for TSIS-1 data, so they are available to the scientific community.