New Study Sheds Light On How Mosquitoes Wing It 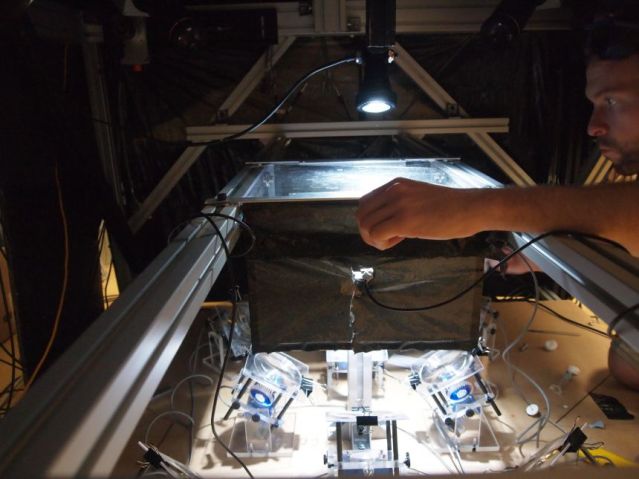 A specialised arena with eight powerful infra-red high-speed cameras recording at 10,000 frames per second was constructed to capture the wing movements of mosquitoes in flight. Image credit: Bomphrey/Nakata/Phillips/Walker

The unique mechanisms involved in mosquito flight have been shared for the first time in a new Oxford University collaboration, which could inform future aerodynamic innovations, including tiny scale flying tech.

Much is known about mosquito behaviour but scientists ave long had questions about the aerodynamics of how they manage to fly. In the past technology has not been capable of capturing high speed wing movements, but recent science developments have made it possible to track and understand the wing movements of flies.

In partnership with the Royal Veterinary College and Chiba University, scientists from Oxford’s Department of Zoology analysed the insects’ every movement to understand how mosquitoes fly. Well known carriers of diseases, mosquitoes’ abnormally long, narrow wings and distinctive flight behaviour set them apart from other insects. Not only that, but when flapped, these wings move back and forth approximately 800 times each second – far faster than any other insect of comparable size.  To compensate for these rapid movements, their stroke amplitude (the angle through which the wing sweeps) is less than half that of any other insect measured to date. 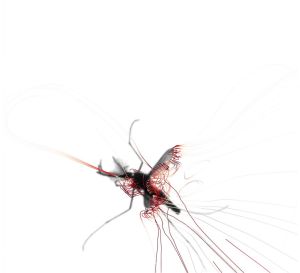 Using a combination of high-speed cameras set up in a miniature film studio, designed specifically for the project and computer simulations, the team recorded the mosquitoes’ subtle three-dimensional wing movements and mapped their complex aerodynamics. The insects’ insects’ flight was captured using eight cameras, each recording at 10,000 frames per second. The equipment used allowed the researchers to observe the insect’s subtlest movements and these motions were replicated via computer simulation, to show the airflow produced by their beating wings, revealing that mosquitoes enhance their flight forces using two novel aerodynamic mechanisms that make use of rapid and exquisitely controlled wing rotations.

In addition to generating lift by leading-edge vortices, which are rotational, bubbles of low pressure created along the edge of the wing, mosquitoes use two novel aerodynamic mechanisms to make them fly; trailing edge vortices and rotational drag. The trailing-edge vortex is a new form of ‘wake capture’, where the mosquitoes align their wings with the fluid flows they created during the previous wingbeat, recycling energy that would otherwise be lost to the environment.

‘The usual flapping pattern of short, fast sweeps means that mosquitoes cannot rely on conventional aerodynamic mechanisms that most insects and helicopters use.” says Dr Richard Bomphrey of the Royal Veterinary College, who led the study, published this week in the journal Nature. “Instead, we predicted that they must make use of clever tricks as the wings reverse their direction at the end of each half-stroke.’

Of the challenges faced during the project, Dr Simon Walker, of the Oxford Animal Flight Group in Oxford’s Department of Zoology and co-author of the study said: ‘Recording mosquitoes during free-flight represented a huge technical challenge due to their small size, extreme wing-beat frequency, and the presence of large antennae and legs, that can mask the view of their wings.’

These new aerodynamic mechanisms help explain the unusual shape of mosquito wings. ‘In most insects, aerodynamic forces increase as you move out along the wing length because the wing tip travels faster than the wing root,’ says Dr Toshiyuki Nakata, from Chiba, who ran the computer simulations. ‘However, by exploiting aerodynamics that rely on rapid pitching of the wing, the force can be produced along the entire length. Having a long slender wing can therefore increase lift force and simultaneously reduce the cost of flight.’

Understanding the mechanisms that enable mosquitoes and other flying insects to fly in their unique way, could support the development of aerodynamic innovations such as tiny scale flying tech, like piezoelectric actuators.

Speaking on how the findings can be built on with future research, Dr Walker said: ‘Understanding the genetic make-up and physiology of mosquitoes tells us how they are able to fly, but it is also the first step to understanding why. There is still much to learn from flying insects, the more we know about them, the better our chance of understanding their flight behaviour, how they carry disease and eventually how to stop them from doing so.’

Source: The University of Oxford