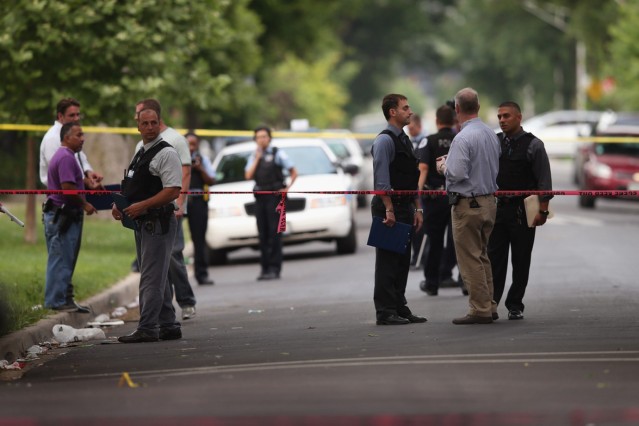 Police investigate a crime scene where seven people were shot on July 6, 2013 in Chicago, Illinois.

As gun violence in Chicago makes headlines across the country, a group of researchers are finding success in some of Chicago’s most dangerous neighborhoods with a new approach to reducing crime and increasing school engagement among inner city youth.

This approach teaches young people to think more slowly in moments of conflict.

In field experiments in Chicago, the slow-thinking approach reduced violent-crime arrests by up to 44 percent.

Anuj Shah, assistant professor of behavioral science at the University of Chicago Booth School of Business.

One of the researchers is Anuj Shah (left), assistant professor of behavioral science at the University of Chicago Booth School of Business. He explains how slow thinking can help diffuse dangerous situations in distressed urban communities.

“Rather than try to change young people’s behavior by focusing on the rewards and punishments they will face five, ten, or twenty years into the future, a different and perhaps more effective strategy is to acknowledge that a great deal of youth’s behavior is automatic,” write Shah and Jens Ludwig, director of the University of Chicago Crime Lab, in a policy brief for The Hamilton Project at the Brookings Institution. “We believe it is possible to make a big difference at low cost to help them slow down and think more deliberately.”

The evidence looks promising. The researchers conducted large-scale, field experiments with nonprofit youth organizations in Chicago to test slow thinking as a form of cognitive behavior therapy. The programs helped young people recognize high-stakes situations and taught them how to slow down and rewire their automatic responses. The approach reduced violent-crime arrests by up to 44 percent and kept more students out of prison.

To learn more about the research on slow thinking: Read the May 2015 working paper, “Thinking, Fast and Slow? Some Field Experiments to Reduce Crime and Dropout in Chicago,” by Shah, University of Chicago Crime Lab Director Jens Ludwig and Co-Director Harold Pollack, and colleagues from Harvard University, Northwestern University and University of Pennsylvania. Read the May 2015 policy brief by Ludwig and Shah, “Think Before You Act: A New Approach to Preventing Youth Violence and Dropout.” Read the July 26, 2015, Boston Globe story, “Why Slow Thinking Wins.”