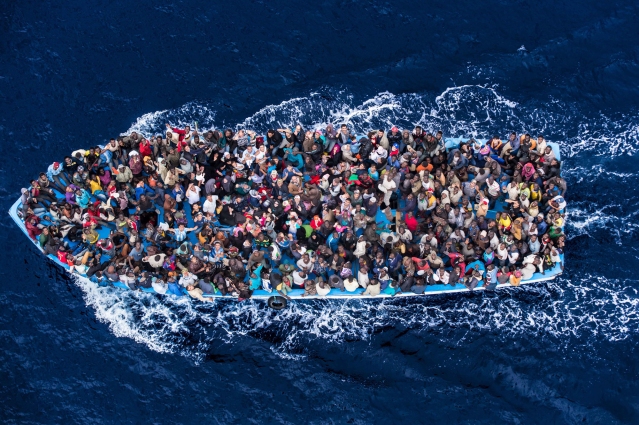 Hundreds of refugees and migrants aboard a fishing boat are pictured moments before being rescued by the Italian Navy as part of their Mare Nostrum operation in June 2014. / The Italian Coastguard / Massimo Sestini

Europeans are more likely to accept asylum-seekers who have higher employability, consistent testimonies, are particularly vulnerable and Christian. But despite being highly sensitive to those fleeing persecution, new research reveals a prominent anti-Muslim bias amongst Europeans of all ages and social and political backgrounds.

In a study published Thursday 22 September in Science, researchers from the London School of Economics and Political Science (LSE), Stanford University and the University of Zurich detail the findings of a large-scale survey experiment. To understand what type of asylum-seeker European citizens would be willing to accept, 18,000 citizens in 15 countries were asked to evaluate 180,000 hypothetical profiles of asylum-seekers that randomly varied on relevant attributes such as gender, age, occupational skills, religion and country of origin. The results reveal that not all asylum-seekers are equal in the eyes of the public.

The expected economic potential or burden of an individual was found to play an important role in whether their bid for asylum was accepted or rejected across Europe. Asylum-seekers with higher skill occupations, such as doctors, teachers and accountants, were about 13 percentage points, 9 percentage points and 8 percentage points respectively more likely to be accepted when compared to those who had previously been unemployed.

The third major consideration revealed across Europe was religion. Muslim asylum-seekers were 11 percentage points less likely to be accepted when compared with Christian asylum-seekers who were otherwise similar in background and history. This penalty is sizable and larger than the penalty applied to unemployed asylum-seekers versus teachers. Furthermore, Christian asylum-seekers were only slightly preferred over Agnostic refugees, reflecting a strong anti-Muslim bias rather than a pro-Christian bias. This bias was displayed by both left- and right-wing voters, although for those on the right the bias was twice as large in size compared to those on the left of the political spectrum.

The country of origin of each asylum-seeker, however, played only a minor role in generating support. Those from Syria and the Ukraine were most likely to be accepted, with asylum-seekers from Kosovo least welcome, but the differences were small, with only 4 percentage points between the most and least popular country of origin.

Dr Dominik Hangartner, Associate Professor in LSE’s Department of Government, said: “The public’s strong anti-Muslim bias and preference for highly skilled asylum-seekers who can speak the language of the host country points to a mounting challenge for policymakers, given that most asylum-seekers currently originate from Muslim-majority countries and may lack the desired professional and language skills.

“The fact that we found a shared humanitarian concern amongst the European public, however, suggests that a clear narrative would increase support for accepting refugees. Policy makers whose goal is to alleviate the social tensions of the current crisis and generate more public acceptance of asylum-seekers should highlight refugees’ deservingness and vulnerability as well as their economic contributions to their host societies.”

‘How Economic, Humanitarian, and Religious Concerns Shape European Attitudes toward Asylum-Seekers’ by Kirk Banksak, Jens Hainmueller and Dominik Hangartner is published in Science.