It may be hard to imagine competing over who gets to kiss a frog, but when it comes to mating, a new study concludes that some frogs have moved out of the pond onto land to make it easier for the male in the pair to give sexual rivals the slip, perhaps leaving them green with envy. 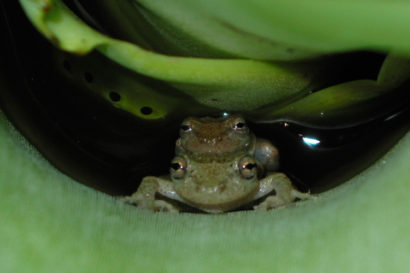 Biologists have long thought that some frog species evolved to mate on land — sometimes in unusual places — instead of in open water to better guard eggs and tadpoles from easily being eaten by fish and other predators. But the new research by a team of U.S. and Brazilian frog biologists suggests that mating on land in many species might in part be a strategy that male frogs use to ensure that their own DNA gets passed on, instead of the DNA of their rivals. Sexual selection may trump natural selection in the evolution of these reproductive behaviors, according to the new study, published online ahead of print this week in The American Naturalist.

Frogs have a “dizzying array” of reproductive strategies, according to Rayna Camille Bell, a UC Berkeley postdoctoral fellow who contributed to data collection, analyzed and interpreted much of the data, and helped co-author the study, which was led by her doctoral thesis advisor, Kelly Zamudio, a professor at Cornell University.

Mating in frogs typically involves the male wrapping his arms around the female, the female depositing eggs and the male fertilizing the eggs, which will hatch into tadpoles and ultimately develop into froglets. The earliest frogs completed all of these steps in water, but among different frog species there are various strategies for accomplishing these reproductive tasks before a new generation hops or swims off on its own. Frog species vary in where they mate, where they lay eggs, where tadpoles develop and whether and how eggs and tadpoles are tended to by parent frogs. Some species even skip the egg stage, giving birth to live tadpoles or even froglets.

Moving toward mating on land

“Biologists noticed an apparent linear progression toward more terrestrial reproduction throughout frog evolution and proposed that frogs avoid putting their eggs and tadpoles in streams or ponds because they would be more vulnerable to aquatic predators,” Bell said. The apparent trend toward increasingly terrestrial reproduction is most evident in tropical frogs, perhaps because more humid environments more easily permit reproduction on land without eggs or tadpoles drying up.

But in reviewing datasets built upon the field work of other biologists and their own data on hundreds of species in two different families of tropical frogs, the Hylidae and Leptodactylidae, the researchers found that this was not generally the case.

They found that most of the diversity in reproductive strategies involves the egg stage. Even when eggs are deposited on land, tadpoles often quickly end up in dangerous waters, falling off a leaf into a stream, for instance. This pattern indicates that selection is acting independently on eggs versus tadpoles, Bell said, suggesting that there might be other evolutionary advantages of depositing eggs on land.

Get a room … or a volcano mud nest, or a bromeliad 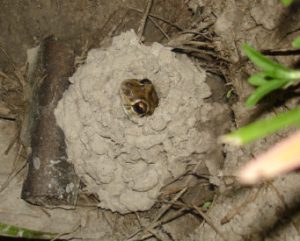 Male of Leptodactylus bufonius inside the constructed terrestrial chamber where the pair will lay their eggs. (Photo by Kelly R. Zamudio)

“Besides avoiding aquatic predators, the benefit of depositing your eggs on land away from the main body of water — if you are a male frog — is that you get the female away from the breeding frenzy where there are hundreds of males all competing for access to females,” Bell said. “On land, it’s easier to make sure that no other male is moving in on your female and fertilizing her eggs.”

Bell and co-authors found that when mating occurs away from the main body of water, the mating site is often more private and hidden from competing males. Some frog species mate in the water-containing folds of bromeliad leaves, for example, and males in other species even build volcano-shaped mud nests that they may guard while mating.

The researchers hypothesized that if sexual selection is playing a role in the evolution of these mating behaviors, then in species where competition for fertilizing eggs is fierce males should have larger sperm-producing testes, similar to what has been observed in other animals where male competition for mates is intense. Conversely, males in species with private breeding sites should have smaller testes.

Indeed, Bell and colleagues determined that the mass of male testes, which is a proxy for sperm competition, is smaller and less variable in frogs that hide while breeding, indicating they are less vulnerable to other males horning in.

What is special about the tropics?

Most studies of frog mating systems have been in temperate regions. Like this study, new natural history data on mating systems and reproductive modes in both temperate and tropical frog species are likely to challenge preconceived notions of how and why these complex reproductive behaviors evolved, Bell said.

“The tropics have the greatest frog species diversity, as well as the most diversity and complexity in frog reproductive modes,” Bell said, “But we know the least about the biology, behavior and diversity of these tropical species, even though many are threatened, and some are only now being discovered for the first time. Hopefully our study will draw attention to how much we still have to learn about sexual selection and mating system dynamics in frogs.”