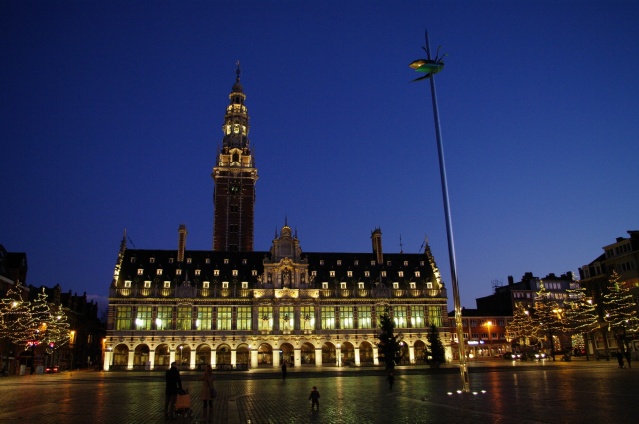 Library of The University of Leuven – KU Leuven

KU Leuven, Imperial College London, and the University of Cambridge lead the Reuters Top 100: Europe’s Most Innovative Universities ranking. The Reuters Top 100 aims to identify which institutions contribute the most to science and technology, and have the greatest impact on the global economy.

The ranking uses proprietary data and analysis tools from the Intellectual Property & Science division of Thomson Reuters to examine a series of patent and research-related metrics, and get to the essence of what it means to be truly innovative.

How can potential partners, investors, faculty, and students know if an institution is really transforming science and technology and affecting the global economy? To answer that question, Reuters set out to find and rank Europe’s top 100 innovative universities, building a methodology that employs 10 different metrics. The criteria focused on academic papers, which indicate basic research performed at a university; and patent filings, which point to an institution’s interest in protecting and commercializing its discoveries. Finally, they trimmed the list so that it only included European universities, and then ranked them based on their performance.

KU Leuven earned its first place rank, in part, by putting out a high volume of influential inventions. Its researchers submit more patents than almost any other university in Europe, and outside researchers frequently cite KU Leuven inventions in their own patent applications.

At first glance, the most innovative universities in Europe don’t appear to have much in common. Some are Catholic schools, some are secular, others are state-run and some are private. One is 920 years old. Another has been an independent institution for less than a decade. They’re scattered across the continent, some in large cities, others in rural areas.

The single unifier: Nearly all of them emphasize practical research and applied science, as opposed to pure academics. Technical universities and colleges dominate Reuters’ first-ever ranking of Europe’s top 100 innovative

universities, a list that identifies the educational institutions that are doing the most to advance science, invent new technologies, and help drive the global economy.

The most innovative university in Europe is KU Leuven, a Dutch-speaking school based in Belgium’s Flanders region. Founded in 1425 by Pope Martin V, it’s the world oldest Catholic university, but its instruction isn’t limited to theology. KU’s modern mission is comprehensive and advanced scientific research. Open to students of all faiths, it operates autonomously from the Church, and maintains one of the largest independent research and development organizations on the planet –in fiscal 2014, research spending exceeded 426 million euros.

KU Leuven earned its first-place rank, in part, by churning out a high volume of influential inventions. Its researchers submit more patents than almost any other university in Europe, and outside researchers frequently cite KU Leuven inventions in their own patent applications.

Those are key criteria in the Reuters ranking of Europe’s Most Innovative Universities, which was compiled in partnership with the Intellectual Property & Science division of Thomson Reuters.

Some of the top-rated universities on the list were created when larger institutions spun out their technical departments. Imperial College London (ranked #2) was formerly The Imperial College of Science, Technology

Similarly, Switzerland’s Ecole Polytechnique Federale de Lausanne took its current form in 1968, when it was spun out of the University of Lausanne. Today EPFL is a federal institute and is obliged to grant admission to every Swiss high-school graduate.

Other top-ranked institutions were specifically created to serve as centers of innovation. Germany’s Technical University of Munich (#5) was founded in 1868 by King Ludwig II of Bavaria, and tasked with driving the kingdom’s transition from an agricultural to an industrial state. Today the school has 39,081 students enrolled across its three locations in Munich, Freising-Weihenstephan and Garching. Thirteen TUM professors and alumni have won a Nobel Prize since 1927, including Rudolf Mössbauer (physics, 1961) and Ernst Otto Fischer (chemistry, 1973)

German universities — technical and otherwise — account for 24 of the 100 most innovative universities in Europe, more than any other country. The United Kingdom comes in second with 17 institutions on the list, including the two oldest universities in the English-speaking world: The University of Cambridge, ranked #3, and the University of Oxford, ranked #8. Many of history’s greatest scholars have studied or taught at “Oxbridge,” including Isaac Newton, Charles Darwin and Alan Turing (Cambridge); and Roger Bacon, Robert Hooke and Edmund Halley (Oxford).

The Republic of Ireland only has three schools on the entire list, but with a population under 5 million people, it can boast more top 100 innovative universities per capita than any other country in Europe. Trinity College Dublin, ranked #48, is Ireland’s highest-ranked university. Founded in 1592 by Queen Elizabeth I and modeled on Oxford and Cambridge, today Trinity is notable for holding a higher percentage of cited patents in its portfolio than any other university in Europe’s top 100 —more evidence of Ireland’s outsized impact on global research and development.

To compile its ranking of Europe’s most innovative universities, the IP & Science division of Thomson Reuters began by identifying more than 600 global organizations –including educational institutions, nonprofit charities, and government-funded labs– that publish the most academic research. Then they evaluated each candidate on 10 different metrics, focusing on academic papers (which indicate basic research) and patent filings (which point to an institution’s ability to apply research and commercialize its discoveries). Finally, they trimmed the list so that it only included European universities, and then ranked them based on their performance. Click here for the full methodology.

Since the rankings measure innovation on an institutional level, it may overlook particularly innovative departments or programs; a university might rank low for overall innovation, but still operate one of the most innovative biotechnology labs in the world, for instance. But whether they rank in the top 10 or somewhere in the 90s, all the universities ranked in the Europe Top 100 count among the world’s best. They produce original research, create useful technology and stimulate the global economy.