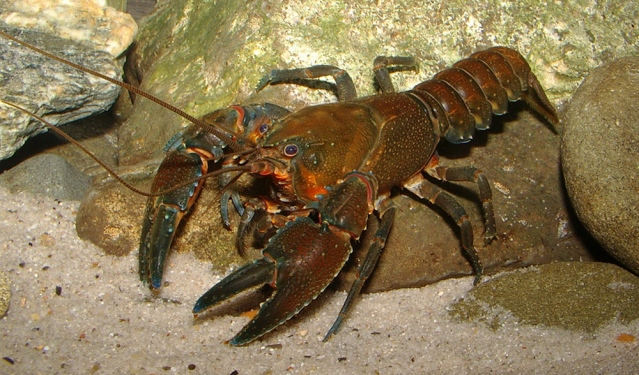 A symbiotic relationship that has existed since the time of the dinosaurs is at risk of ending, as habitat loss and environmental change mean that a species of Australian crayfish and the tiny worms that depend on them are both at serious risk of extinction.

A relationship that has lasted for 100 million years is at serious risk of ending, due to the effects of environmental and climate change. A species of spiny crayfish native to Australia and the tiny flatworms that depend on them are both at risk of extinction, according to researchers from the UK and Australia.
Look closely into one of the cool, freshwater streams of eastern Australia and you might find a colourful mountain spiny crayfish, from the genus Euastacus. Look even closer and you could see small tentacled flatworms, called temnocephalans, each only a few millimetres long. Temnocephalans live as specialised symbionts on the surface of the crayfish, where they catch tiny food items, or inside the crayfish’s gill chamber where they can remove parasites. This is an ancient partnership, but the temnocephalans are now at risk of coextinction with their endangered hosts.
Coextinction is the loss of one species, when another that it depends upon goes extinct. In a new study, researchers from the UK and Australia reconstructed the evolutionary and ecological history of the mountain spiny crayfish and their temnocephalan symbionts to assess their coextinction risk.
This study was based on DNA sequences from crayfish and temnocephalans across eastern Australia, sampled by researchers at James Cook University, sequenced at the Natural History Museum, London and Queensland Museum, and analysed at the University of Sydney and the University of Cambridge.
The results are published in the Proceedings of the Royal Society B. “We’ve now got a picture of how these two species have evolved together through time,” said Dr Jennifer Hoyal Cuthill from Cambridge’s Department of Earth Sciences, the paper’s lead author. “The extinction risk to the crayfish has been measured, but this is the first time we’ve quantified the risk to the temnocephalans as well – and it looks like this ancient partnership could end with the extinction of both species.”
Mountain spiny crayfish species diversified across eastern Australia over at least 80 million years, with 37 living species included in this study. Reconstructing the ages of the temnocephalans using a ‘molecular clock’ analysis showed that the tiny worms are as ancient as their crayfish hosts and have evolved alongside them since the Cretaceous Period. Today, many species of mountain spiny crayfish have small geographic ranges. This is especially true in Queensland, where mountain spiny crayfish are restricted to cool, high-altitude streams in small pockets of rainforest. This habitat was reduced and fragmented by long-term climate warming and drying, as the continent of Australia drifted northwards over the last 165 million years.
As a consequence, mountain spiny crayfish are severely threatened by ongoing climate change and the International Union for the Conservation of Nature (IUCN) has assessed 75% of these species as endangered or critically endangered. “In Australia, freshwater crayfish are large, diverse and active ‘managers’, recycling all sorts of organic material and working the sediments,” said Professor David Blair of James Cook University in Australia, the paper’s senior author. “The temnocephalan worms associated only with these crayfish are also diverse, reflecting a long, shared history and offering a unique window on ancient symbioses.
We now risk extinction of many of these partnerships, which will lead to degradation of their previous habitats and leave science the poorer.” The crayfish tend to have the smallest ranges in the north of Australia, where the climate is the hottest and all of the northern species are endangered or critically endangered. By studying the phylogenies (evolutionary trees) of the species, the researchers found that northern crayfish also tended to be the most evolutionarily distinctive.
This also applies to the temnocephalans of genus Temnosewellia, which are symbionts of spiny mountain crayfish across their geographic range. “This means that the most evolutionarily distinctive lineages are also those most at risk of extinction,” said Hoyal Cuthill. The researchers then used computer simulations to predict the extent of coextinction. This showed that if all the mountain spiny crayfish that are currently endangered were to go extinct, 60% of their temnocephalan symbionts would also be lost to coextinction. The temnocephalan lineages that were predicted to be at the greatest risk of coextinction also tended to be the most evolutionarily distinctive.
These lineages represent a long history of symbiosis and coevolution of up to 100 million years. However they are the most likely to suffer coextinction if these species and their habitats are not protected from ongoing environmental and climate change. “The intimate relationship between hosts and their symbionts and parasites is often unique and long lived, not just during the lifespan of the individual organisms themselves but during the evolutionary history of the species involved in the association,” said study co-author Dr Tim Littlewood of the Natural History Museum. “This study exemplifies how understanding and untangling such an intimate relationship across space and time can yield deep insights into past climates and environments, as well as highlighting current threats to biodiversity.”
Reference: Jennifer F. Hoyal Cuthill et al. ‘Australian spiny mountain crayfish and their temnocephalan ectosymbionts: an ancient association on the edge of coextinction?’ Proceedings of the Royal Society B (2016). DOI: 10.1098/rspb.2016.0585
Source: University of Cambridge