For the first time, scientists have observed ripples in the fabric of spacetime. These ‘gravitational waves’ originate from violent events in the Universe. The team of Professor Gijs Nelemans from the Radboud University Nijmegen and at the KU Leuven Institute of Astronomy were involved in the detection. Nelemans also coordinated the interpretation of the event that caused the detected gravitational wave.

Their conclusion? The gravitational wave GW150914 originated from the fusion of two black holes located at a distance of approximately 1.5 billion light years from the earth. The original black holes had 35 and 30 times the mass of the Sun when they fused into a new, rapidly rotating black hole containing 62 times the mass of the Sun. The remaining three solar masses were converted into energy, according to the famous Einstein formula E = mc2, and emitted as gravitational waves.

Violent events such as a binary black hole merger had been predicted but never observed. “This is the beginning of a new era in astronomy. We are offered a whole new way to observe the Universe and to study all kinds of extreme objects”, says a very enthusiastic Professor Nelemans.

In 1916, while working on his general relativity theory, Albert Einstein predicted the existence of gravitational waves. It took 100 years to find observational proof, as this is a major technological challenge. Gravitational waves are detected with laser interferometry. Each interferometer has two arms that are several kilometres long and are at right angles to each other. When a gravitational wave passes by, one arm becomes slightly shorter, the other longer. The difference is extremely small (of the order 10-18 m) and requires measurements with extreme precision, but it allows the detection of a gravitational wave. 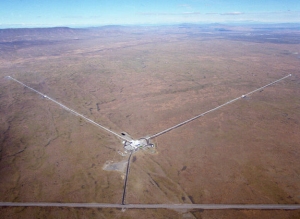 This is what happened on 14 September 2015 at 10:51 pm Belgian time (UTC +1). Gravitational waves were detected in both detectors of the Laser Interferometer Gravitational-wave Observatory (LIGO), located in Livingston (Louisiana) and in Hanford (Washington). The LIGO observatories are funded by the American National Science Foundation (NSF). They were designed, built, and now run by Caltech and MIT.

The impact of this observation is huge. It confirms a century-old theoretical concept, and, even more importantly, it opens an new window on the Universe. Until now, we looked at the Universe and its objects by studying light. Light, however, has a major drawback: it cannot penetrate everywhere, so large parts of the Universe have remained invisible. Gravitational waves are completely different from light. They can give us access to the dark secrets of the Universe. Scientists all over the world are eager to start a new era that promises new knowledge of and insights into astronomy and physics.