Evidence Of A Prehistoric Massacre Extends The History Of Warfare

Skeletal remains of a group of foragers massacred around 10,000 years ago on the shores of a lagoon is unique evidence of a violent encounter between clashing groups of ancient hunter-gatherers, and suggests the “presence of warfare” in late Stone Age foraging societies.

The fossilised bones of a group of prehistoric hunter-gatherers who were massacred around 10,000 years ago have been unearthed 30 km west of Lake Turkana, Kenya, at a place called Nataruk.

Twelve skeletons were in a relatively complete state, and ten of these showed clear signs of a violent death: including extreme blunt-force trauma to crania and cheekbones, broken hands, knees and ribs, arrow lesions to the neck, and stone projectile tips lodged in the skull and thorax of two men.

Several of the skeletons were found face down; most had severe cranial fractures. Among the in situ skeletons, at least five showed “sharp-force trauma”, some suggestive of arrow wounds. Four were discovered in a position indicating their hands had probably been bound, including a woman in the last stages of pregnancy. Foetal bones were uncovered.

The bodies were not buried. Some had fallen into a lagoon that has long since dried; the bones preserved in sediment.

The findings suggest these hunter-gatherers, perhaps members of an extended family, were attacked and killed by a rival group of prehistoric foragers. Researchers believe it is the earliest scientifically-dated historical evidence of human conflict – an ancient precursor to what we call warfare.

The origins of warfare are controversial: whether the capacity for organised violence occurs deep in the evolutionary history of our species, or is a symptom of the idea of ownership that came with the settling of land and agriculture.

The Nataruk massacre is the earliest record of inter-group violence among prehistoric hunter-gatherers who were largely nomadic. The only comparable evidence, discovered in Sudan in the 1960s, is undated, although often quoted as of similar age. It consists of cemetery burials, suggesting a settled lifestyle.

“The deaths at Nataruk are testimony to the antiquity of inter-group violence and war,” said Dr Marta Mirazón Lahr, from Cambridge’s LCHES, who directs the ERC-funded IN-AFRICA Project and led the Nataruk study, published today in the journal Nature.

“These human remains record the intentional killing of a small band of foragers with no deliberate burial, and provide unique evidence that warfare was part of the repertoire of inter-group relations among some prehistoric hunter-gatherers,” she said.

The site was first discovered in 2012. Following careful excavation, the researchers used radiocarbon and other dating techniques on the skeletons – as well as on samples of shell and sediment surrounding the remains – to place Nataruk in time. They estimate the event occurred between 9,500 to 10,500 years ago, around the start of the Holocene: the geological epoch that followed the last Ice Age.

Now scrubland, 10,000 years ago the area around Nataruk was a fertile lakeshore sustaining a substantial population of hunter-gatherers. The site would have been the edge of a lagoon near the shores of a much larger Lake Turkana, likely covered in marshland and bordered by forest and wooded corridors.

This lagoon-side location may have been an ideal place for prehistoric foragers to inhabit, with easy access to drinking water and fishing – and consequently, perhaps, a location coveted by others. The presence of pottery suggests the storage of foraged food.

“The Nataruk massacre may have resulted from an attempt to seize resources – territory, women, children, food stored in pots – whose value was similar to those of later food-producing agricultural societies, among whom violent attacks on settlements became part of life,” said Mirazón Lahr.

“This would extend the history of the same underlying socio-economic conditions that characterise other instances of early warfare: a more settled, materially richer way of life. However, Nataruk may simply be evidence of a standard antagonistic response to an encounter between two social groups at that time.”

Antagonism between hunter-gatherer groups in recent history often resulted in men being killed, with women and children subsumed into the victorious group. At Nataruk, however, it seems few, if any, were spared.

Of the 27 individuals recorded, 21 were adults: eight males, eight females, and five unknown. Partial remains of six children were found co-mingled or in close proximity to the remains of four adult women and of two fragmentary adults of unknown sex.

No children were found near or with any of the men. All except one of the juvenile remains are children under the age of six; the exception is a young teenager, aged 12-15 years dentally, but whose bones are noticeably small for his or her age.

Ten skeletons show evidence of major lesions likely to have been immediately lethal. As well as five – possibly six – cases of trauma associated with arrow wounds, five cases of extreme blunt-force to the head can be seen, possibly caused by a wooden club. Other recorded traumas include fractured knees, hands and ribs.

Three artefacts were found within two of the bodies, likely the remains of arrow or spear tips. Two of these are made from obsidian: a black volcanic rock easily worked to razor-like sharpness. “Obsidian is rare in other late Stone Age sites of this area in West Turkana, which may suggest that the two groups confronted at Nataruk had different home ranges,” said Mirazón Lahr.

One adult male skeleton had an obsidian ‘bladelet’ still embedded in his skull. It didn’t perforate the bone, but another lesion suggests a second weapon did, crushing the entire right-front part of the head and face. “The man appears to have been hit in the head by at least two projectiles and in the knees by a blunt instrument, falling face down into the lagoon’s shallow water,” said Mirazón Lahr.

Another adult male took two blows to the head – one above the right eye, the other on the left side of the skull – both crushing his skull at the point of impact, causing it to crack in different directions. 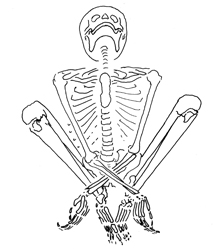 The remains of a six-to-nine month-old foetus were recovered from within the abdominal cavity of one of the women, who was discovered in an unusual sitting position – her broken knees protruding from the earth were all Mirazón Lahr and colleagues could see when they found her. The position of the body suggests that her hands and feet may have been bound.

The Nataruk remains are now housed at the Turkana Basin Institute, Turkwell Station, for the National Museums of Kenya.

While we will never know why these people were so violently killed, Nataruk is one of the clearest cases of inter-group violence among prehistoric hunter-gatherers, says Mirazón Lahr, and evidence for the presence of small-scale warfare among foraging societies.

For study co-author Professor Robert Foley, also from Cambridge’s LCHES, the findings at Nataruk are an echo of human violence as ancient, perhaps, as the altruism that has led us to be the most cooperative species on the planet.

“I’ve no doubt it is in our biology to be aggressive and lethal, just as it is to be deeply caring and loving. A lot of what we understand about human evolutionary biology suggests these are two sides of the same coin,” Foley said 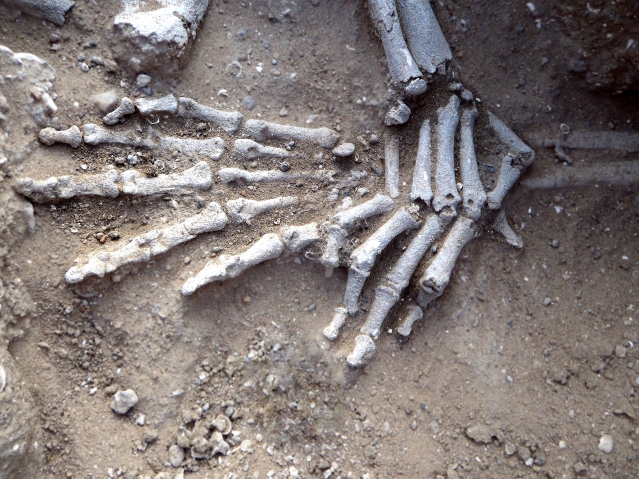 Detail of hands of in situ skeleton. Position suggests they had been bound.

Skeleton of man lying prone in lagoon sediments with multiple lesions to skull.

Prof Robert Foley in the field.

Skeleton of woman found reclining on left elbow with fractures on knees. Position of the hands suggests they may have been bound.