Seth Rogin: ‘If You’re Reading This Now, It’s Too Late’

Knowing ‘what everyone’s talking about’ has always been the mark of the fashionable and connected. It’s very much easier to do in the age of social media, when comments and pictures can be shared in seconds and go viral within hours. So how much better would it be to know in advance what everyone will be talking about in a few hours’ time?

Seth Rogin, Chief Revenue Officer of Mashable, spoke to students at Saïd Business School about how the company, and particularly its ability to predict social media trends, is transforming publishing.

While it might be tempting to assume that a company ‘born in and of social media’ is a technology business, it is clear that Rogin’s heart is in publishing and journalism. As Chief Revenue Officer, he sees his responsibility as driving revenue so that ‘We can do the journalism we really care about’.

Print is dying out, he confirmed: ‘It won’t die completely but it is certainly withering.’ However, he believes that many of the established print publications are innovating strongly within the confines of their print ‘legacy’ – he does not underestimate the challenge of running the New York Times, with its legions of journalists, foreign bureaux, and print readership, however diminishing. Mashable does not have the same sort of legacy so it is free to reinvent the traditional newspaper publishing model – and it has done so very successfully: Mashable content is tweeted or shared three times a second.

Mashable’s predictive software, Velocity, was born as an aid to journalists. Three years ago, the CTO saw journalists trawling through social media, trying to predict what could be the Next Big Thing and the most exciting stories to cover. He turned his former experience working for a hedge fund into developing a tool that can forecast which stories will be shared and when, and which will go viral..

‘Imagine you’re a journalist and you’ve got something that will tell you when a story in your subject matter will be viral in three hours,’ said Rogin. ‘It takes the legwork out of the way and allows you to be ahead of the game … Data can make you a stronger journalist.’ 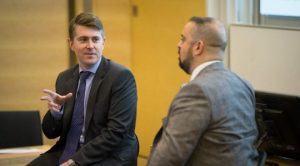 Advertising is getting smarter

While Velocity was developed for journalists and underpins Mashable’s publishing (the software ‘designs’ the front page according to the forecasted trends, though it can be over-ridden when there is important breaking news), it also contributes to building revenue as a tool for advertisers and a licensed product.
As Rogin said, something that tells journalists what stories and videos people will be sharing can be equally helpful in telling companies what people are saying about them on social media or connecting politicians to what is happening at the ‘grass roots’.

It can also help brands target their advertising at the people they most want to reach: the ‘influencers’ who are setting the trends and making something go viral. ‘By the time something is trending, it has already trended,’ explained Rogen. ‘When a story has reached the “peak sharing” point it is not being shared by influencers … we use Velocity to find influencer in the act of influencing.’

‘Platforms such as Facebook and Twitter are the plumbing; what’s important is what flows through the pipes.’ Listening to Rogin, it is clear he believes that everything stands or falls by the quality of the content. ‘Our readers choose every day to read our content,’ he said, and while branded content (what used to be called ‘advertorials’) forms a sizeable chunk of Mashable’s advertising revenue, it is clearly identified as such – they call it ‘Brand Speak’.

Not that there is no value in content created by advertisers or brands. Readers enjoy the advertisements in fashion magazines just as much as they do the editorial, and his answer to the problem of people blocking advertisements on their phones or tablets is simply to make the advertisements better and more entertaining.

So what of the future? He believes that mobile will be increasingly important, especially in developing markets where people have largely bypassed the PC, and mobile video even more so. He is sanguine about the fact that competitors may eventually catch up with Velocity (though he does not expect this to happen any time soon) – ‘no technology lasts forever’.  But most of all, he believes in continuing to do what any good publisher does best: ‘Respect the reader’.