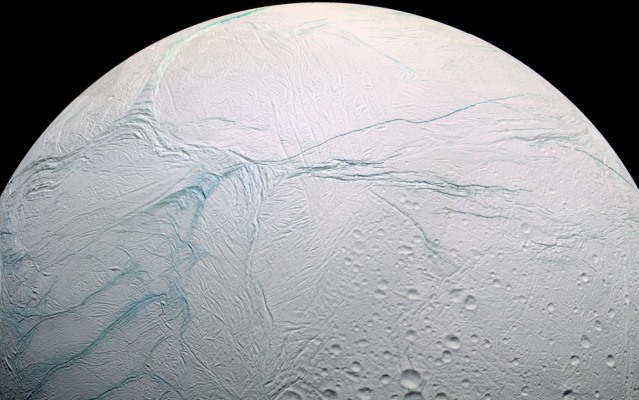 Cornell University researchers have learned that a global ocean lies beneath the moon’s thick icy crust by measuring with precision the tiny wobbles of Saturn’s moon Enceladus – whose cosmic quavers are detectable only in high-resolution images taken by NASA’s Cassini spacecraft.

Cornell planetary scientists have analyzed more than seven years worth of Enceladus images taken by the spacecraft, which has been orbiting Saturn since mid-2004. “This was a hard problem that required years of observations and calculations involving a diverse collection of disciplines, but we are confident we finally got it right,” said Peter Thomas, Cornell research scientist and lead author of “Enceladus’ measured physical libration requires a global subsurface ocean,” published online by the journal Icarus (September 2015.)

The geologically diverse Enceladus vigorously vents vapor and liquid water from fractures in its icy crust at its south polar region, as discovered early in Cassini’s exploration of the Saturn system. However, space scientists were uncertain about the extent of the subsurface water source.

With each Cassini photographic pass, Thomas and others painstakingly pinpointed and measured Enceladus’ topographic features – about 5,800 points – by hand. A slight wobble, about a tenth of a degree, was detected, but even this small motion – called a libration – is far larger than if the surface crust were solidly connected to the satellite’s rocky core. Thus, the scientists determined that the satellite must have a global liquid layer, far more extensive than the previously inferred regional liquid “sea” beneath the South Pole.

“If the surface and core were rigidly connected, the core would provide so much dead weight that the wobble would be far smaller than we observe it to be,” said Matthew Tiscareno, who left Cornell in the summer to join the SETI Institute in Mountain View, California. “This proves that there must be a global layer of liquid separating the surface from the core,” he said.

“We’re just at the start of learning that Enceladus is incredibly interesting,” said Joe Burns, Cornell’s Irving Porter Church Professor of Engineering, professor of astronomy and dean of the faculty. “Thanks to great spacecraft like Cassini and exquisitely fine measurements, we’re seeing things not possible 20 years ago.”

For Carolyn Porco, Cassini imaging team lead at Space Science Institute in Boulder, Colorado, this work illustrates complexity and the many different parts of scientific investigation: The primary measurements were marked manually; the geometry is derived from accurate knowledge of spacecraft location, tracking Cassini’s radio signal and using its images to locate features on the satellites.

“This is a major step beyond what we understood about this moon before, and it demonstrates the kind of deep-dive discoveries we can make with long-lived orbiter missions to other planets,” said Porco. “Cassini has been exemplary in this regard.”

The Cassini-Huygens mission is a cooperative project of NASA, the European Space Agency and the Italian Space Agency. NASA’s Jet Propulsion Laboratory in Pasadena, California, manages the mission.