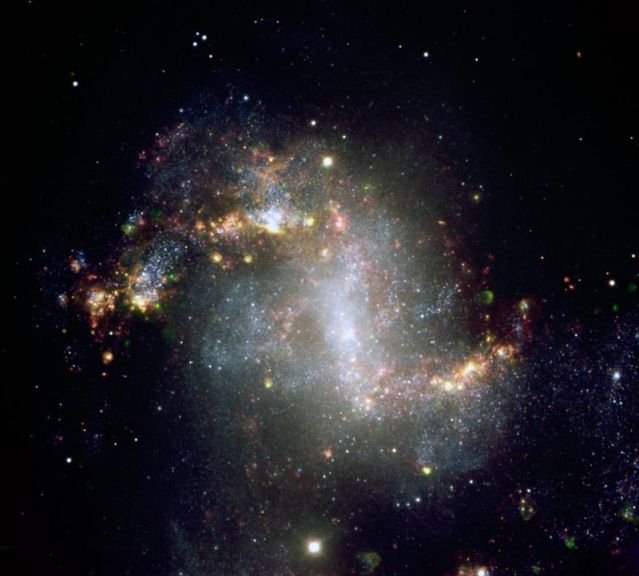 The central parts of the starburst galaxy NGC 1313. The very active state of this galaxy is evident from the image, showing many star formation regions. A great number of supershell nebulae, that is, cocoons of gas inflated and etched by successive bursts of star formation, are visible. The green nebulosities are regions emitting in the ionised oxygen lines and may harbour clusters with very hot stars. This colour-composite is based on images obtained with the FORS1 instrument on one of the 8.2-m Unit Telescope of ESO’s Very Large Telescope, located at Cerro Paranal. The data were obtained in the night of 16 December 2003, through different broad- (R, B, and z) and narrow-band filters (H-alpha, OI, and OIII).

Nearly all black holes come in one of two sizes: stellar mass black holes that weigh up to a few dozen times the mass of our sun or supermassive black holes ranging from a million to several billion times the sun’s mass. Astronomers believe that medium-sized black holes between these two extremes exist, but evidence has been hard to come by, with roughly a half-dozen candidates described so far.

A team led by astronomers at the University of Maryland and NASA’s Goddard Space Flight Center has found evidence for a new intermediate-mass black hole about 5,000 times the mass of the sun. The discovery adds one more candidate to the list of potential medium-sized black holes, while strengthening the case that these objects do exist. The team reported its findings in the September 21, 2015 online edition of Astrophysical Journal Letters.

The result follows up on a similar finding by some of the same scientists, using the same technique, published in August 2014. While the previous study accurately measured a black hole weighing 400 times the mass of the sun using data from NASA’s Rossi X-ray Timing Explorer (RXTE) satellite, the current study used data from the European Space Agency’s XMM-Newton satellite.

“This result provides support to the idea that black holes exist on all size scales. When you describe something for the first time, there is always some doubt,” said lead author Dheeraj Pasham, a postdoctoral associate at the Joint Space-Science Institute, a research partnership between UMD’s Departments of Astronomy and Physics and NASA Goddard. “Identifying a second candidate with a different instrument puts weight behind both findings and gives us confidence in our technique.”

The new intermediate-mass black hole candidate, known as NGC1313X-1, is classified as an ultraluminous X-ray source, and as such is among the brightest X-ray sources in the nearby universe. It has proven hard to explain exactly why ultraluminous X-ray sources are so bright, however. Some astronomers suspect that they are intermediate-mass black holes actively drawing in matter, producing massive amounts of friction and X-ray radiation in the process.

Against this backdrop of haphazard X-ray fireworks created by NGC1313X-1, Pasham and his colleagues identified two repeating flares, each flashing at an unusually steady frequency. One flashed about 27.6 times per minute and the other about 17.4 times per minute. Comparing these two rates yields a nearly perfect 3:2 ratio. Pasham and his colleagues also found this 3:2 ratio in M82X-1, the black hole they identified in August 2014, although the overall frequency of flashing was much higher in M82X-1.

Although astronomers are not yet sure what causes these steady flashes, the presence of a clockwork 3:2 ratio appears to be a common feature of stellar mass black holes and possibly intermediate-mass black holes as well. The flashes are most likely caused by activity close to the black hole, where extreme gravity keeps all surrounding matter on a very tight leash, Pasham said.

Pasham and Tombesi hope that identifying ultraluminous X-ray sources that exhibit the key 3:2 flashing ratio will yield many more intermediate-mass black hole candidates in the near future.

“Our method is purely empirical, it’s not reliant on models. That’s why it’s so strong,” Pasham explained. “We don’t know what causes these oscillations, but they appear to be reliable, at least in stellar mass black holes.”

“Observing time is at a premium, so you need to build a case with an established method and a list of candidates the method can apply to,” Pasham explained. “With this result, we are in a good position to move forward and make more exciting discoveries.”

Source: The University of Maryland, College of Computer, Mathematical, and Natural Sciences