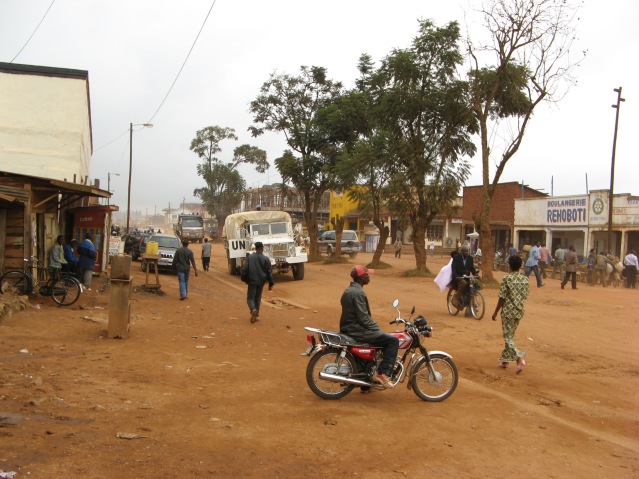 The 7R Future Leadership Institute is following Belgian Floris Buter on a 12 day field trip in Africa, in order to gather topography data for a hydro-power project. The collected data are to be wired to the Belgian engineering firm TPF. They need the data to make a feasibility study.

Since Floris is out there today, the communication depends on the availability of a working internet line, which results in diary fragments coming through in a rather chaotic way.

Today you will find a report of his fourth day, reaching the site where a hydro power station could be built in the future.

10:59 Somebody knocks on my door. It is Zébédée. He asks me if everything is OK. I explain him I had some fun last night and that I slept in. He urges me to take the breakfast.

11:21 I go downstairs to the restaurant and ask for breakfast. The waiter says it’s normally only until 10:00 am but that he probably can arrange something for me. I get tea with milk and a plate full of sugar. With a straight face I tell the waiter there’s not enough sugar. He looks at me, confused, then I start to smile and he understands that I’m joking. He returns with an amused smile and a giggle.

12:01 I get my laptop, telephone and powerpack and leave the hotel premises. Outside the hotel gate I take a left, a right and the second left, up to the house where Graham lives. The concierge guides me to the apartment of Graham. I tell him Graham lives on the third floor.  Surprisingly he takes me to the fourth floor where he asks me whether I’m looking for the Americans. I confirm and he takes me back to the third floor.

12:07 I step into Graham’s apartment  and he gives me a big bottle Okpai water. I plug in my powerpack for charging and we start talking about what happened last night: Crazy crazy….

13:43 We leave the apartment to go to l’Auberge where we are going to play a board game called ‘Seven Wonders’. But first we walk to a place where we can eat yogurt. While we’re strolling, it starts raining and we buy umbrella’s for 3 dollars.

14:52 We arrive at the yogurt place. Graham and I take a large yogurt for 800 Congolese francs. Apryl gets a smaller size for 600 Congolese francs. It’s amazing how fast the 3G network of Airtel can be in Butembo: we’re talking about the umbrella’s and from the umbrella’s the conversation goes to the “umbrella song” of Rihanna. We look it up on YouTube, play it, I open my umbrella inside the yogurt place and while we’re watching Rihanna in her Umbrella clip, we sing together:

As we’re standing in front of the yogurt shop together with a bunch of other people, Graham decides he also needs an umbrella eh eh ella ella. He gives 10$ to a guy and we wait for the umbrella. The plan is to take ‘moto taxis’ to l’Auberge and ask the ‘moto taxi’ driver to go slowly in order to benefit from the umbrella.

After a while people close to us start laughing and eating eggs while thanking Graham for the eggs. Graham looks confused and asks Apryl and me: “Did I just get robbed?” We agree he wasn’t robbed because nobody took money from him. They just announced he would pay for the eggs. When the umbrella guy returns with change, Graham kind of voluntarily pays for the eggs. 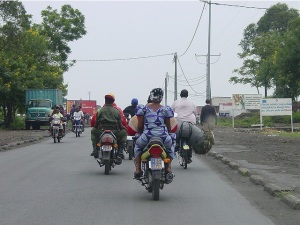 14:39 It still rains, and it looks like it will be raining for quite a while. In Butembo, the only official taxis are motto taxis. I notice a small Toyota on the road with a mama. I wave her down. She stops and accepts to bring us to l’Auberge for 5$. We arrive in l’Auberge and we eat a “soup de potage” or a vegetable soup. After a while, the other group arrives.

18:30 We take ‘moto taxis’ back to the apartment and we watch a movie “The Worlds End”. Bizarre.