Study: People Tend To Locate The Self In The Brain Or The Heart 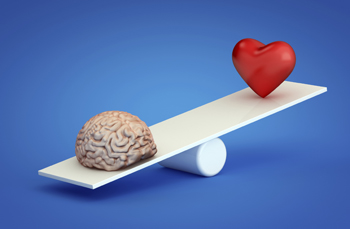 Whether people locate their sense of self in the brain or the heart can have a major influence on their decision-making, according to a new study by management and business experts at Rice University and Columbia University.

Overall, the study found people tend to locate the self in the brain.

The paper, “Who You Are Is Where You Are: Antecedents and Consequences of Locating the Self in the Brain or the Heart,” will be published in the journal Organizational Behavior and Human Decision Processes.

“We view our research as a first step toward reviving the debate about which part of our body contains the seat of the self – a debate that dates back to the ancient Greek philosophers,” said Hajo Adam, an assistant professor of management at Rice’s Jones Graduate School of Business. “Our findings demonstrate not only that the preference for the brain versus the heart as the location of the self systematically depends on a person’s self-construal — meaning the perceptions that individuals have about their thoughts, feelings and actions in relation to others — but also that the location of the self has important implications for people’s opinions on contentious medical issues as well as prosocial contributions.”

Adam co-authored the paper with Otilia Obodaru, an assistant professor of management at the Jones School, and Adam Galinsky, the Vikram S. Pandit Professor of Business and chair of the management division at Columbia’s business school.

Participant groups ranged in size from 95 to 156 people between the ages of 20 and 40; about half the participants were women and half were men. The majority of participants were Americans. The study included a group of Indians, a cultural group that tends to have interdependent self-construals.

In the first study, participants were told that a person’s identity and sense of self are an essential feature of people’s humanity, and that the researchers were interested in finding out where the sense of self is located. The authors explained that some areas or parts of the body may seem more or less connected to the sense of self, so they asked participants to indicate which part of their body is most connected to their sense of who they are. In the next studies, the authors sought to probe participants’ perception of where the self is located more subtly to provide convergent evidence across a variety of measures and underscore the robustness of the effect.

“These results suggest that where people locate the self might be a notable characteristic that shapes people’s psychological processes and decision-making,” said Obodaru. “Consequently, there may be great value in better understanding the antecedents and consequences of being a ‘brain person’ or a ‘heart person.’”

For more information about Adam and Obodaru’s research, visit the Jones School’s website.

Reprinted with permission of Rice University