by University of Leicester 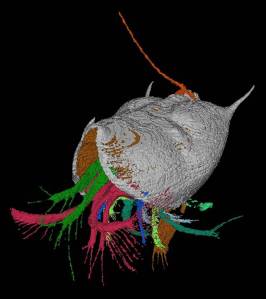 A 425 million-year-old parasite: the pentastomid Invavita piratica (in orange) attached externally to the shell of its host (an ostracod). The ostracod is using its limbs to swim forward.
Credit: Siveter, Briggs, Siveter and Sutton

An international team of scientists led by the University of Leicester has discovered a new species of fossil in England – and identified it as an ancient parasitic intruder.

The fossil species found in 425-million year old rocks in Herefordshire, in the Welsh borderland, is described as ‘exceptionally well preserved.’  The specimens range from about 1 to 4 millimeters long.

The fossil species – a ‘tongue worm’, which has a worm-like body and a head and two pairs of limbs – is actually a parasite whose representatives today live internally in the respiratory system of a host, which it enters when it is eaten.

The new fossil, which was originally entirely soft-bodied, is the first fossil tongue worm species to be found associated with its host, which in this case is a species of ostracod – a group of micro-arthropods (crabs, spiders and insects are also arthropods) with two shells that are joined at a hinge.

Professor David Siveter, of the Department of Geology at the University of Leicester made the discovery working alongside researchers from the Universities of Oxford, Imperial College London and Yale, USA.  Their research is published in the journal Current Biology and was supported by The Natural Environmental Research Council, together with the Leverhulme Trust, the John Fell Oxford University Press (OUP) Research Fund and Yale Peabody Museum of Natural History.

Professor Siveter said: “This discovery is important not only because examples of parasites are exceptionally rare in the fossil record, but also because the possible host of fossil tongue worms – and the origin of the lifestyle of tongue worms – has been the subject of much debate.

Professor Siveter said tongue worms  – technically termed pentastomids – are in fact not worms at all; they are an unusual group of tiny and widespread parasitic arthropods. Their fossils are exceptionally rare and until now are known only from a handful of isolated juvenile specimens.

Today they are known from about 140 species, nearly all of which are parasitic on vertebrate animals, particularly reptiles and including humans.  Some of the fossil tongue worm specimens occur inside the shell, near the eggs of the ostracod; others are attached to the external surface of its shell, a unique position for any fossil or living tongue worm.

Professor Siveter added: “The tongue worm and its host lived in a sea that 425 million years ago – during the Silurian period of geological time – covered much of southern Britain, which was positioned then in warm southerly subtropical latitudes. The animals died and were preserved when a volcanic ash rained down upon them. The new species has been named Invavita piratica, which means an ‘ancient intruder’ and ‘piracy’, referring to its parasitic lifestyle in the sea.”

The fossils have been reconstructed as virtual fossils by 3D computer modelling.

Courtesy of University of Leicester