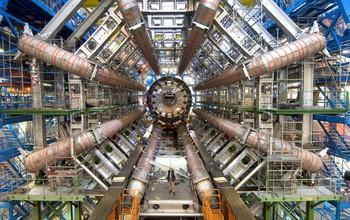 A new agreement between the United States and the European Organization for Nuclear Research will pave the way for renewed collaboration in particle physics, promising to yield new insights into fundamental particles and the nature of matter and our universe.
Credit: CERN

A new agreement between the United States and the European Organization for Nuclear Research (CERN) signed May 7th, 2015, will pave the way for renewed collaboration in particle physics, promising to yield new insights into fundamental particles and the nature of matter and our universe.

“CERN is a place for explorers, in the truest sense of the word,” said NSF Director France A. Córdova. “The discoveries enabled by this world-class laboratory–insights into the standard model, into the fundamental nature of our universe–have yielded answers to some questions and produced new questions. This agreement renews NSF’s commitment to CERN and sets the stage for future scientific discoveries.”

The Large Hadron Collider ring is 27 kilometers in length and buried deep beneath the Geneva, Switzerland, countryside, with ATLAS and CMS detectors located on opposite sides.
Credit: CERN

“I am delighted to sign this agreement,” said CERN Director General Rolf Heuer. “It allows us to look forward to a fruitful, long-term collaboration with the United States, in particular in guiding the Large Hadron Collider (LHC) to its full potential over many years through a series of planned upgrades. This agreement is also historic since it formalizes CERN’s participation in U.S.-based programs such as prospective future neutrino facilities for the first time.”

The agreement aligns European and American long-term strategies for particle physics that emphasize close international cooperation. This global relationship has already generated amazing results, through instruments such as the LHC at CERN and the Tevatron particle collider at Fermilab. The LHC is best known for facilitating the discovery of the Nobel Prize-winning Higgs boson in 2012 and may reveal more information about this subatomic particle while providing the opportunity to discover other subatomic particles and learn more about the universe’s composition.

The LHC is the largest, highest energy particle accelerator in the world.
Credit: NSF

“Today’s agreement not only enables U.S. scientists to continue their vital contribution to the important work at CERN, but it also opens the way to CERN’s participation in experiments hosted in the United States,” said Energy Secretary Ernest Moniz. “As we’ve seen, international collaboration between the United States and CERN helps provide a foundation for groundbreaking discoveries that push crucial scientific frontiers and expand our understanding of the universe.”

CERN and the United States have a long history of collaboration: American physicist Isidor Rabi was one of CERN’s founders, and American scientists have been involved in CERN projects since the institution’s creation in the early 1950s. CERN provided equipment for U.S. projects, such as Brookhaven National Lab’s Relativistic Heavy Ion Collider–used for nuclear physics research–and European scientists were critical to the success of U.S.-based particle colliders, like Tevatron.

“Society and the global research community benefit greatly from productive scientific cooperation across borders,” said John P. Holdren, director of the White House Office of Science and Technology Policy. “Today’s agreement is a model for the kinds of international scientific collaboration that can enable breakthrough insights and innovations in areas of mutual interest.”

This agreement will automatically renew every five years unless one of the signatories indicates a need to modify or end the agreement.