The View From Up There, Down Here

When many people saw the first stunning photos of the fragile blue marble of Earth from space, it changed their outlook of humanity. It was a singular moment in time when people around the world were watching and looking toward the future as NASA began to turn small steps into giant leaps.

As we continue our recent Earth Day celebration, an investigation on the International Space Station that provides unprecedented panoramic views of our home will celebrate its first year in space.

The High Definition Earth Viewing (HDEV) investigation sent four commercially available cameras housed in a single unit to the station last year on the third SpaceX resupply mission. One year ago, April 30, 2014, a robotic arm extracted the unit from the SpaceX trunk, attaching it to the exterior of the orbiting laboratory, and activated the cameras — transmitting the mesmerizing views of Earth.

The view switches between the four fixed cameras and streams live online along with a real-time map to track the location of the station for anyone to watch their home planet and enjoy the same view experienced by space station crew members. Since the cameras began broadcasting a live stream a year ago, the number of views is approaching 50 million — attesting to the popularity of the project.

The primary purpose of the project is not, however, just to share amazing images of Earth.

“The investigation has become multi-purpose for us,” said Susan Runco, principal investigator for HDEV at NASA’s Johnson Space Center in Houston. “We are testing the resiliency of long-term exposure of the cameras to space, but in making this live streaming video available for anyone to watch anytime, I think we remind people of just how beautiful our home is and that there are humans on this orbiting platform right now, living and working off the Earth, for the Earth.” 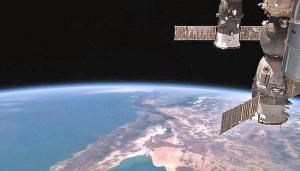 A view of Earth from one of the High Definition Earth Viewing cameras mounted on the hull of the International Space Station.
Credit: NASA

There are moments during the stream when viewers are treated to complete darkness as the station passes in Earth’s shadow or during a temporary loss of signal from the station. Solar rays and the continuous switching to different ground communications relay stations during the station’s orbit can occasionally cause a brief interruption of the video signal. The rest of the time, the cameras transmit a clear image of the planet below.

The cameras are enclosed in a special housing to protect them from the bitter cold of space, but they are still exposed to the harsh radiation of their environment. Scientists will analyze the effect of space on the video quality during the time HDEV is operational.

“We believe this will help engineers decide which cameras are the best types to use on future missions into deep space,” Runco said. “Cameras sent up for other investigations on station have returned showing a degradation of the signal. We want to see how long these new cameras can last before the image is no longer useful.” 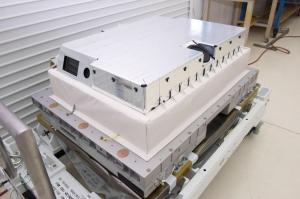 The completed flight assembly of the High Definition Earth Viewing unit before it was launched to the International Space Station in 2014.
Credit:NASA

Educational outreach has been an important component of the project through the entire life cycle, not only using the images in the classroom, but also in creating the project itself.

“Through our High Schools United with NASA to Create Hardware (HUNCH) program, student teams in the Houston area helped design and build some of the camera structural and support components,” said Runco. “More students from the University of Bonn in Germany and the University of Houston in Clear Lake, Texas, help operate HDEV and participate in monitoring the effects space has on the cameras.”

While the signals from the camera are not recorded on the space station, the video is periodically recorded on the ground to compare images to previous video and analyze how well the systems hold up in the space environment for possible future use.

“Using off-the-shelf products is often more cost-effective than designing new ones for space applications,” Runco said. “Ground tests have shown these cameras could survive the simulated space environment, but actual exposure to low Earth orbit will prove how durable they can be for extended missions. We will know more when the cameras are returned to Earth for analysis in 2017.”

From the first photos of the fragile blue marble to a live video stream online, such striking views from space may make many people envious that they can’t see the view from space with their own eyes, but also thankful to live on such a beautiful planet.