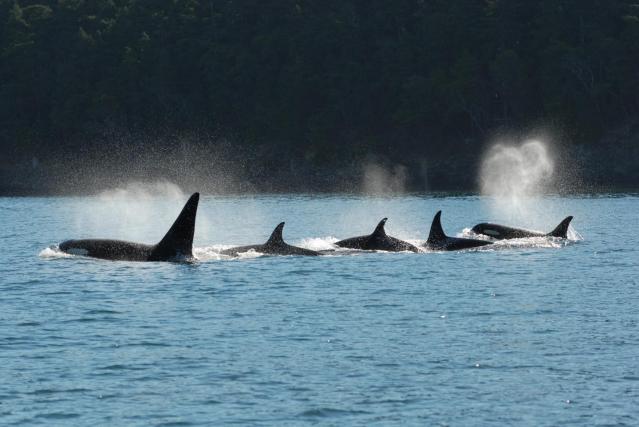 Menopause is a downright bizarre trait among animals. It’s also rare. Outside of the human species, only the female members of two whale species outlive their reproductive lives in such a major way. Female killer whales typically become mothers between the ages of 12 and 40, but they can live for more than 90 years. By comparison, males of the species rarely make it past 50. Now, researchers have new evidence to explain why, evolutionarily speaking, these select female whales live so remarkably long.

Older individuals serve as key leaders, directing younger members of whale society, and especially their own sons, to the best spots for landing tasty meals of salmon. In so doing, older females help their kin to survive. This leadership role takes on special significance in difficult years when salmon are harder to come by.

The researchers say the discovery offers the first evidence that a benefit of prolonged life after reproduction is that post-reproductive individuals act as repositories of ecological knowledge.

“Menopause is one of nature’s great mysteries,” says Lauren Brent of the University of Exeter. “Our study is the first to demonstrate that the value gained from the wisdom of elders may be one reason female killer whales continue to live long after they have stopped reproducing.”

To understand why menopause is such a great mystery, it’s important to recall that evolution is all about reproduction and survival. Traits that enable individuals to pass more of their genes onto the next generation win out. The question, then, was how to explain the fact that killer whale females could live for decades beyond their ability to pass on any genes to future generations directly.

Brent and colleagues from the University of Exeter, York University, and the Center for Whale Research suggest that menopause evolved in the whales because those females help to ensure the survival and reproductive success of their younger kin. And they do this by sharing the wisdom they’ve accumulated over the years about where to find food.

The research team, funded by the Natural Environment Research Council, came to this conclusion based on data collected by the Center for Whale Research over the last 35 years. They also observed 102 individual killer whales in the wild. Their data include birth and death dates, as well as genetic and social relationships between whales.

When the researchers added fisheries data on salmon abundances into that mix, they turned up an even more remarkable pattern. Post-reproductively aged females were especially strong group leaders in years when salmon availability was low.

The findings in whales suggest that the origin of menopause in humans may have a similar explanation, the researchers say.

“In humans, it has been suggested that menopause is simply an artefact of modern medicine and improved living conditions,” says Darren Croft of the University of Exeter, senior author of the study. “However, mounting evidence suggests that menopause in humans is adaptive. In hunter-gatherers, one way that menopausal women help their relatives, and thus increase the transmission of their own genes, is by sharing food. Menopausal women may have also shared another key commodity: information.”

Especially before the information age or even the written word, can you imagine how valuable those wise women must have been?

For more information, you can find read the full article  by Brent et al. “Ecological Knowledge, Leadership, and the Evolution of Menopause in Killer Whales” in the Cell Press journal Current Biology of March 5th, 2015.