The Guide To The Future Of Medicine

The Guide To The Future Of Medicine
by Bertalan Meskó

Enormous technological changes are heading our way. If they hit us unprepared, which we are now, they will wash away the medical system we know and leave it a purely technology–based service without personal interaction. Such a complicated system should not be washed away. Rather, it should be consciously and purposefully redesigned piece by piece. If we are unprepared for the future, then we lose this opportunity.

Here is the list of the real examples and practical stories demonstrating why we should all be ready for these changes.

Empowered patients. E-Patient Dave demonstrated what the relationship between patient and doctor should be like and communities such as PatientsLikeMe.com and smartpatients.com let patients discover each other and share stories.

Gamifying health. By playing games on Lumosity.com, our memory, flexibility, attention, and focus can be improved. The smartphone application “Zombies, Run!” requires the runner to pick up virtual supplies and escape from virtual zombie hordes making exercise more motivated. The Microsoft Kinect 3D sensor is able to monitor and analyze performance in real time, giving patients feedback as they exercise and complete assignments.

Eating in the future. Foodini aims at printing out food using fresh ingredients. It can make ravioli, cookies, or crackers. The Cultured Beef project aims to make commercially available meat created by harvesting muscle cells from a living cow. TellSpec is a hand–held device designed to determine what macronutrients or specific ingredients the food contains.

Augmented and virtual reality. Dr. Rafael Grossmann became the first surgeon to demonstrate the use of Google Glass during a live surgical procedure. Eyes–On™ Glasses uses imaging technology to find the location of the most suitable vein. Google is working on a multi–sensor contact lens that would work with Google Glass, other wearables, Android smartphones and even smart televisions.

Telemedicine. An autonomous remote–presence robot called RP–VITA is used in monitoring surgical patients before, during, and after their operations. Video consultation is becoming a routine part of care offered by the Stanford Hospital & Clinics.

Re-thinking the medical curriculum. The “Healing Blade” card game takes medical students into a world of sorcery and creatures where real–world knowledge of infectious diseases and therapeutics play a pivotal role in the winning strategy.

Surgical and humanoid robots. In underdeveloped regions, surgical robots could be deployed so that operations are performed by surgeons who control the robots from thousands of kilometers away. Medical drones could deliver supplies and drugs to conventionally unreachable areas.

Genomics. The shipping cost of our sample will be more expensive than the cost of actually sequencing our genome. In years, we will stop talking about personalized medicine as it will no longer be anything special.

Health sensors. Using devices to measure numerous health parameters is not only possible in the ivory tower of medicine as 2014 is the year of the wearable revolution. Additionally, the world’s lightest and thinnest flexible sensor system will produce stress–free wearable healthcare sensors.

Portable diagnostics. The Qualcomm Tricorder X Prize promises to award $10 million to the first team to build a medical tricorder. An estimated 500 million smartphone users, including medical professionals, consumers, and patients, will be using a healthcare–related application by 2015. Physicians will prescribe a lot more applications than medications to their patients.

Growing orgains in labs. Biomaterials such as liver tissue and skin have been successfully printed out. In 2014 scientists succeeded in regenerating a living organ, the thymus, which produces immune cells.

DIY biotechnology. Citizen scientists are changing the way research is performed. BioCurious, a hackerspace for biotech, opened with the mission statement that innovations in biology should be accessible, affordable, and open to everyone. Theranos develops a radical blood–testing service that requires only a pinprick and a drop of blood to perform hundreds of lab tests from standard cholesterol checks to sophisticated genetic analyses.

The 3D printing revolution. Printing medical devices, living tissues, then eventually cells and drugs might not be far away from everyday use. Lee Cronin, a chemist at the University of Glasgow, wants to do for the discovery and distribution of prescription drugs what Apple did for music.

Full physiological simulation. Supercomputers could run analyses on thousands of drug targets on billions of patient models in silico. HumMod is a simulation system that provides a top–down model of human physiology from organs to hormones. The Wyss Institute and a team of collaborators seek to link ten human organs–on–chips to imitate whole–body physiology.

Artificial intelligence. IBM Watson is perhaps the most important supercomputer, and one of the first to enter the artificial intelligence (AI) market in our time. Using 500 randomly selected patients for its simulations, the AI models cost $189 whereas treatment–as–usual cost $497.

Nanotechnology. Tiny nanorobots in our bloodstream could detect diseases and send alerts to our smartphones or digital contact lenses before disease could develop in our body. The first DNA nanodevice that survived the body’s immune defense was created in 2014.

Hospitals of the future. NXT Health designed and funded a prototype of the future hospital rooms intended to reduce infections, falls, errors and ultimately costs.

Virtual-digital brains. Japanese scientists could map one second’s worth of activity in the human brain with K computer. Optogenetics shows the potential to provide new therapies for several medical conditions such as epilepsy, Parkinson’s disease, or depression. Dr. Kevin Warwick managed to control machines and communicate with others using only his thoughts with a cutting–edge neural implant.

The rise of recreational cyborgs. In 2016, Zurich, Switzerland will host the first championship sports event under the name Cybathlon for parathletes using high–tech prostheses, exoskeletons, and other robotic and assistive devices. Chris Dancy is usually referred to as the world’s most connected man. He has between 300 and 700 systems running and collecting real–time data about his life at any given time.

Cryonics, longevity. A research performed in Pennsylvania in May, 2014 tested a new method of freezing gunshot victims while doctors tried to save their lives. The Cryonics Institute in Clinton Township, Michigan stores hundreds of cryopreserved people and animals along with DNA and tissue samples.

There are thousands of reasons why to look forward to the amazing, yet uncertain future of medicine! But we must start preparing now.

Bertalan Meskó is a medical futurist who blogs at ScienceRoll and is the author of The Guide to the Future of Medicine. 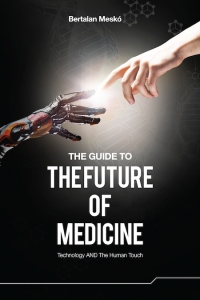