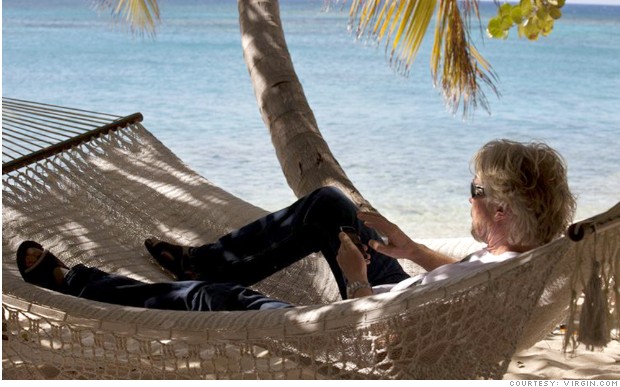 Richard Branson announced in a blog post on Tuesday that the employees who work in his main offices will now have unlimited vacation days. According to CNN, the 160 or so people who work at Virgin Group’s locations in London, New York and Sydney do not have to seek approval from their superiors to take off from work for however long they’d like. Branson: “Treat people as human beings, give them that flexibility and I don’t think they’ll abuse it. And they’ll get the job done.”

The eccentric CEO said the new vacation policy is more like having no policy at all, as management will not even have to keep track of the days the employees take off. Branson is confident that the employees will take vacation days “when they feel a hundred per cent comfortable that they and their team are up to date on every project and that their absence will not in any way damage the business.” He described in detail how he was inspired by Netflix, which took a huge risk in experimenting with this policy yet continues to dominate its respective industry.

Branson cited Netflix’s “Reference Guide on our Freedom and Responsibility Culture,” which states how important it is to “focus on what people get done, not how many hours or days worked.” The tens of thousands of employees at Virgin subsidiaries will be given unlimited vacation days as well if the guinea pigs at the main offices don’t abuse the new system. Many European nations provide many more vacation days than the US. Branson: “The amount of holidays people are given in the States is dreadful. How can you find time to get to know your children if you’re working with very very little holiday time?”

Some are skeptical of the new policy, however, as having no restrictions can often have a reverse effect, making people more afraid of taking advantage of certain freedoms than before. But Branson is far from the only wealthy innovator to encourage working less. Google’s Larry Page has suggested working four days a week, and Mexican communications tycoon Carlos Slim prefers just three. The latter’s plan would add about three more hours to the work day and postpone retirement to 70 or 75.

by SEAN LEVINSON for Elite Daily
Sean Levinson loves writing almost as much as he loves ranting about politics. Elite Daily lets him do both, and he couldn’t be happier now that he’s finally putting his years at SUNY New Paltz to good use. When he’s not writing, Sean enjoys nature excursions, playing the guitar and the Ultimate Fighting Championship. Look for him on “Real Time with Bill Maher,” where he regularly appears in his most precious fantasies.